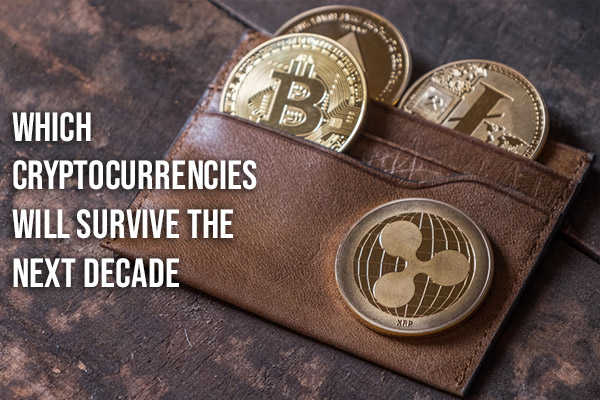 Cryptocurrency is the future, we all have reasons to believe it. But are people ready for the big change? We doubt it! Just because they are forecasted to be the future of money does not make it easier for people to trust it and start investing in it.

There are over 2000 types of Cryptocurrencies available, so how do you know which one to bet your money on? More importantly, the big question is; which Cryptocurrency will survive the next decade? Let’s decode this for you, but before that, let’s find out what the fuss is all about.

The Future of Cryptocurrencies

There is no doubt that the past decade has favored Cryptocurrencies, but its future success is still up for debate. The biggest challenge to its growth is the unique way in which it is generated or ‘mined’ and the fact that it is beyond banks and treasuries as it exists purely in the digital world.

The development of Bitcoin prompted other digital currencies to emerge as well, but their future remains uncertain. Let’s see which types of cryptocurrencies are most likely to survive:

While there is no clear research on how the Cryptocurrencies have impacted the climate and environment but a study has shown that Bitcoin consumes 2.55 Gigahertz of electricity. This is because blockchains rely heavily on processing power. Given the recent concern for environmental conservation, it’s safe to assume that only environment-friendly Cryptocurrency will be acceptable in the future.

Moreover, for a coin to be the best bet for the future, it needs to be ready for global expansion. It means it needs to have all protocols in place. Cryptocurrencies that adhere to all these factors have an increased chance of sustaining than others.

The situation may seem pretty exciting right now, but all the currencies can’t remain in the circulation. While digital currencies are not going anywhere any time soon, it is not sustainable for 2000 different types of digital currencies to stay active. In the past decade, more than a thousand coins have emerged and died. Many more will follow their fate.

So which currencies will survive? Well, mostly those who are backed by financially strong investors.

Hedge funds, individual investors, and financial institutes will play a big role here. Marketing may play a role in the success of Cryptocurrency as well; many people are interested in digital currencies because they provide anonymity, which may make digital marketing redundant.

Therefore, institutions and individuals who have vested interests in digital marketing services are naturally resistant to Cryptocurrency.

Cryptocurrencies that Will Survive the Next Decade

Out of a total of 8% of people who invested in Cryptocurrency in the United States, about 5.15% invested in Bitcoin (BTC). This speaks volumes about the popularity of this cryptocurrency. Bitcoin is presently valued at $9733.

As the value of Cryptocurrencies depends on the confidence of people investing in it, the price of Bitcoin is higher than every other currency.

If we talk about the trends from last year, the value of Bitcoin doubled in 2019 alone. According to the analysts, a similar spike in the rate is in the forecasts for this year as well.

Whatever the case may be, all trends and forecasts suggest Bitcoin is here to stay for a long time.

Tether’s (USDT) growth has been hitting all-time highs in 2020 and for a reason. This Cryptocurrency claims to be backed by a dollar for each token. To explain it in easier words, it is a hybrid between cryptocurrency and fiat money. Tether currency not only takes minutes to transfer, but it also has no fees for moving funds in wallets.

If you are looking for anonymity and private transactions, then Monero (XMR) is for you. It is a decentralized and open-source cryptocurrency that is gaining popularity among people who want security and digital privacy while doing their transactions. Monero is also widely used in deep web transactions and is not possible to trace. Currently, they are working on ways to improve their privacy and ease of digital transactions as well.

When we talk about currencies that will survive the next decade, we cannot skip Litecoin (LTC). When it comes to payments, it is one of the most affordable and fastest Cryptocurrency. If you compare it with Bitcoin and Ethereum, the two currencies above Litecoin, it offers the same potential at a more affordable level.

Each unit is currently trading at $35, which allows more investors to jump in and invest. One thing to note here is that the price of LTC depends on the rate of adoption, but so far, it seems to be right on track.

Ethereum (ETH) is a widely used currency for many projects to digitalize their transactions. Bitcoin may be the most popular one, but Ethereum is the most influential currency.

The reason is pretty simple; it allows thousands of projects to develop on it. For those who are starting in the cryptocurrency space may begin with this because of its accessibility.

With an increase in the demand for blockchains and functions, the value of this digital currency is expected to grow further, and investors see a huge potential in it in the years ahead.

By market capitalization, this is the third most famous Cryptocurrency and the most affordable currency to invest in as well.

The network of Ripple is fast growing and is opening new opportunities in the field of banking, commerce, and payment modes.

Popular remittance giant MoneyGram is in a strategic partnership with Ripple and has received more than $11 million from them to use the blockchain technology.

Besides MoneyGram, other huge companies like Amazon are also using XRP’s on-demand liquidity for their businesses. Experts believe more people will adopt XRP in the next decade, and its price will significantly increase.

Considered one of the most promising Cryptocurrencies of the decade by Chinese experts, EOS is not going anywhere in this decade if we look at the trends.

The EOS system allows users to get rid of the problems with Ethereum and has the potential to replace other blockchains.

According to the analysts, EOS has the potential to rise to 100USD per token if Ethereum fails anytime.

NEO is the first open-source token that has originated from China and has transformed the traditional system of finance by combining the real and digital assets of people and companies alike. What sets it apart from other currencies is its unique trading mechanism that allows people to trust the funds through different platforms. There is no doubt in its rapid growth and demand and is hence often included in these different investment ratings for the next decade. NEO is currently trading at $10.

Factors to Keep in Mind While Choosing Cryptos in 2020

The Higher the liquidity, the faster your Cryptocurrency can be sold in the market at market price.

All popular currencies, such as Bitcoin and Ethereum, are highly liquid. To check the actual demand of a particular cryptocurrency, you can check the trade activity on exchanges as it shows the number of transactions crypto has made in a specific period.

Market capitalization indicates the value of issued coins of a particular currency. A high price means that more Cryptocurrencies are participating in active transactions and, ultimately, more interest from the investors.

Cryptocurrencies are money that exists digitally, not as something physical like a coin or note. “Crypto” comes from secure encrypted ledgers that are called blockchains. It is a virtual currency that works as a medium of exchange. An interesting feature of Cryptocurrency is that it is not issued by any central authority and hence is immune to government manipulation or interference.

The first Cryptocurrency, Bitcoin, was launched a decade ago. It had a slow start at $9.35, but the money peaked in 2017 at 13860.14. It made a lot of people very rich, but it has also had its lows, and people have suffered huge losses because of it as well. That brings me to my next question; what is the future of Cryptocurrencies?

The cryptocurrency market started on a positive note this year, but with the coronavirus pandemic, it is hard to predict its growth. Analysts are now predicting massive record rallies, and that may mean the top Cryptocurrencies may hit new records. On the other hand, some experts see a downward trend, which may mean huge losses for digital currency owners.

So, What do you think is the future of Cryptocurrencies? Which cryptocurrencies in your opinion are sure to survive the next decade?

About Author: Arslan Hassan is an electrical engineer with a passion for writing, designing, and anything tech-related. His educational background in the technical field has given him the edge to write on many topics. He occasionally writes blog articles for Dynamologic Solutions, A software house in Pakistan.