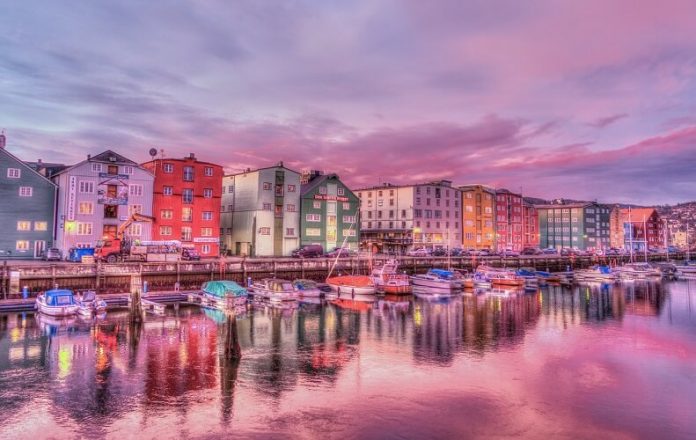 Norway is famous for its economic stability and living standards. It is true that Norwegian love doing business, but they also love having an income. It is not the first time, Norwegians have surprised us with certain and major changes in a very extraordinary way.

Cryptos and the exchanges have been in the market for quite some time already, yet no one had the initiative of creating a bank, not until we hear the story from the Norwegian Block Exchange.

The whole story is not strange at all, and has a very logical beginning, while it also has a very logical ending. The idea of having a bank is the latest of them all, while the main idea was always the exchange block for the local currency Kron. It all started with the Norwegian Air Shuttle company.

The owners and the founders of the company are the Kjos family, who is on the other hand also the initiator and the main actor for the NBX. Initially launched as a crypto exchange, it is now aiming at becoming a bank.

The history of Norwegian Bank Exchange

As already mentioned, the Kjos family is one of those famous Norwegian families, which is in charge of the formation of the Norwegian Block Exchange, simultaneously with the Norwegian Air Shuttle. Actually, those two businesses stood as the motivation and inspiration for each other.

In the interview, with Norwegian Air Shuttle co-founder Stig Aleksander Kjos-Mathisen, who is also managing director for the crypto exchange, we now have the view of the full picture. The main idea was to solve the cash flow, which is a very common problem for every single airline business. This is something that many companies struggle with, and Norwegian saw the clear way to the solution for the problem with the cash flow.

The first-ever discussion regarding the topic started back in 2017. Stig-Kjos Mathisen and his father Bjørn Kjos, former CEO of – and major shareholder in – Norwegian were having a discussion about the cash flow. The main cause of the problem is the credit card and the credit card payment.

As far as most of the people plan their trips prior to the date and make a transaction via credit cards, the airline companies have valid fees and commissions set by the credit card companies. In some cases, the commission for the transaction is as high as 2.5%. When it comes to the overall sum, the amount reaches quite high numbers.

The additional part of the problem is that the companies withdraw their cash, even before the trips are completed, and thus the airline companies lose way more than they have originally planned.

This is exactly why Bjorn and his father decided to hold the conversation in their ski house villa and came to a very good conclusion. In order to avoid the massive cash flow and the massive loss of the cash, they had to come up with alternative payment methods, which would transfer and exchange for the currency in the cryptocurrency. This would have been way easier, yet there was no conversion available into local currency Kronen.

The blockchain model is very common to many businesses all around the world. Many companies and industries use blockchain technology and cryptocurrencies. This is not something the airline company would have been exclusive, but at least innovative. The reason for the huge popularity of the blockchain and cryptocurrency is the safety, security, and anonymity of the transaction.

Another reason is the universal currency and an easy transaction. Many different industries have adopted the system. One of the biggest industries, which is gambling has never hesitated to express its interest in cryptocurrencies and blockchain technologies.

Due to the existing regulations and strict terms, many offshore and international online casinos operate within the market, but not fully comply with the regulations. Such iGaming operators are often unregulated and recently were blocked by the local payment processing firms. This is why many people seek security and anonymity when depositing to such gaming venues online, and this is why they choose cryptos as the means of payment.

Many Norwegian players use cryptocurrencies in order to deal with transactions with the international casino operators, and as such operators often provide a better service – this goes without saying that local players would not mind an extra hustle of employing cryptos.

In addition to this, international iGaming brands often provide much better conditions for their affiliates. Once we click here, we will see a website called Gratis-Spinn – an affiliate website dedicated to Norwegian players, yet it mostly advertises international brands for the aforementioned reason. And to be quite honest, most of the affiliate sites that target the local market will promote the same brands.

This is the next chapter of the family business. While the discussion was getting more and more realistic, creating a personal crypto exchange suitable for the airline companies and accepting local Kron, was the best decision and the most efficient way to save a lot of money and to start another successful business. With this initiative, it was possible to take all ticket sales and put it in cryptocurrencies.

While the first idea was born in 2017, it took way more time to be released than originally planned even in the most pessimistic case. The main reason why everything got delayed this much is that back in 2017, there was no big established Scandinavian crypto exchange, while money had to be quickly exchanged from cryptocurrency to Norwegian kroner.

Additionally, international sellers had huge problems with hackers and money laundering. This was the main purpose of the NBX establishment.

Thus, the road from the very first idea to the launch turned out to be quite a long one. The reason for this was partly difficulties in getting a bank account for the business, a problem many crypto exchanges have.

“We considered buying an existing crypto exchange. We even had one that everything was ready with. Then that deal collapsed due to due diligence. Then we had to build our own solution instead – and it took longer than even our most pessimistic calculations”, the managing director explains.

Even before the initial operation, the NBX was started as a separate company, which was completely independent of the Norwegian Air Shuttle. This was the possible synergy with the airline. The main focus right now is about growing in the Scandinavian market, to gain more customers.

Though, the main problem behind the desire is that the company is registered in Norway and not in any other Scandinavian country. While the interest from Sweden is quite big, NBX does not have any legal right to operate there.

The reason is the regulations and the law. As the founder of the company explained, NBX can not start promotions in Sweden, simply because it is not registered with the Swedish Financial Supervisory Authority. Though they can still receive Swedish customers, as technically they do not facilitate them, but offer the services the customers have come to on their own. Thus, this problem should be solved in the near future.

And again getting back to where we started. How come the exchange can be connected with the bank, and what is the reason behind the whole desired process? First of all, it should be mentioned that a decent amount of money is invested in NBX. Kjos family and the Norwegian Air Shuttle, both have contributed a lot financially. Not only those two but also Sparbanken Ost, which is the oldest bank in Norway are among the investors.

Currently, the company is offering a lot of services to its customers. Among them are different currencies, including bitcoin, ethereum, and our dollar coin. This is something that should be considered as a huge step forward is one of the best achievements they could have made only within a six month operation period. Moreover, the NBX has applied for the e-money license, which is necessary for the legal right to offer payment solutions.

If only all of this was not enough, and now, the company and the family all together are involved in creating the Defi protocol, similar to loans and savings. The main purpose and reason behind this obviously stand on the ground, that NBX is preparing to become a full-function bank, offering customers loans and saving in the cryptos.

Those plans are very far away, as even if the company manages to receive the license, the first most optimistic date to start launching the first solutions is only by the fall of 2022. Thus, there is still a lot of work to be done and the Norwegian bank is still a long way to the future. As far as it seems, the family definitely knows how to do a successful business and we have not once witnessed the process. Risks? That’s the whole fun, they say.