From 20K to 180K: This is the Average Salary of a Blockchain Developer

The demand for blockchain developers is increasing by the day. This is since the blockchain technology itself does not stand still and progressively penetrates a variety of fields of human endeavor.

And since it is an emerging technology there are not enough qualified developers for hire.

The requirements for them are specific and involve a particular set of skills. Companies are looking for software developers who have work experience in Github and who had the opportunity to work in open source projects.

Besides, candidates should at least have immense knowledge in C/C++ as the majority of the projects are written on it. Along with it, a knowledge of Java, JavaScript, Python and in some cases Ruby, Solidity is also needed.

Potential blockchain developers should feel comfortable working with multiple programming languages and have some understanding of cryptography. This kind of developers is particularly valuable in the blockchain market and can count on better-paying jobs.

To be convinced of this let’s take a look at the infographic mapping the country-specific blockchain developers salaries by country: 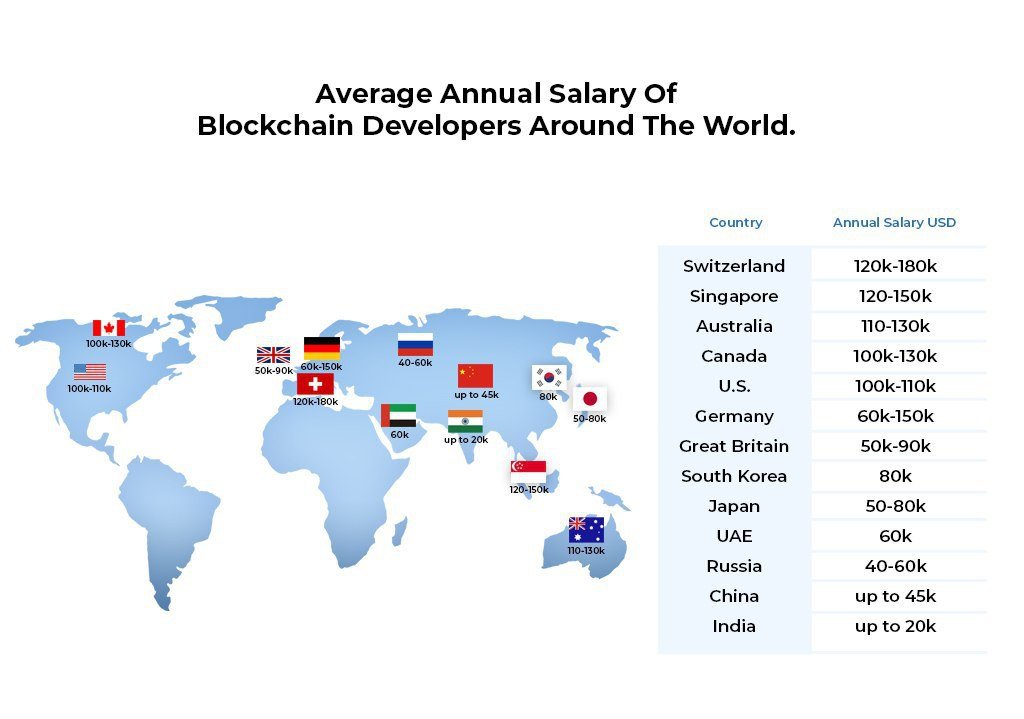 Furthermore, there are different Bug Bounty Programs where practiced blockchain developers are welcomed. Participants of such activities are called Bug Bounty Hunters.

Their goal is to find vulnerabilities in software, websites, and web applications. These programs allow earning lots of money that can be a major or extra income for blockchain developers.

The average period of Bug Bounty Campaign is 2-3 months during which the “hunters” have an option to identify any errors and receive rewards from 100$ to 10000$ depending on the degree of the bug.

Notable examples of the blockchain companies who provide Bug Bounty Programs are EOS, Ethereum, Ripple, TRON, Dash, etc. Hence, in the recent EOS program, more than 50 developers took part and managed to report approximately 100 bugs half of which are critical.

One of the most relevant Bug Bounty Campaign is the one that was launched by Credits Blockchain Platform on June 27. The program had an overall prize fund of 500 000$ and each specific reward varies depending on the severity of the flaw and location.

If a person finds an error and proposes the legitimate amendments, a triple reward is provided. All developers and security experts can participate and open season on bugs.

Ultimately, one thing’s for sure, blockchain developer skills are in demand and there are lots of blockchain companies willing to pay high salaries to such kind of staff member.

There is a lot of money to make in this space both as a major and extra income that allows developers to pocket a considerable sum but at the same time requires from give a great knowledge of technical aspects of the blockchain sphere.

The appearance of the Bitcoin Billionaire app, an auto trading system changed and overtook the whole crypto...
Read more

When Bitcoin was new and not valued at anything or just a few cents anyone could join...
Read more
- Advertisement -

The appearance of the Bitcoin Billionaire app,...
Read more

In this article, we list the Best...
Read more
- Advertisement -

Bitcoin travel is a reality, as several...
Read more
Blog

The crypto industry has grown significantly despite...
Read more