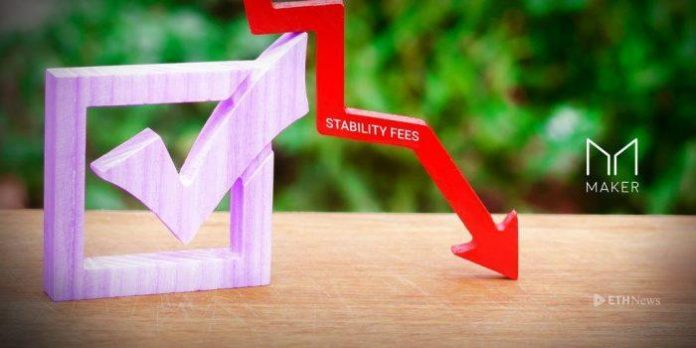 Since August, the stability fee for CDP-issued loans in Dai had been set at 2.5 percent. Now, MKR holders have voted it back down to 0.5 percent.

On December 21, MKR token holders voted to decrease the Dai Stability Fee from 2.5 percent back to its earlier rate of 0.5 percent. According to a MakerDAO Medium post published earlier this week, the proposal was prompted by crypto’s recent dramatic price volatility, which has apparently led to an increased demand for Dai. In order to incentivize the minting of more Dai (which happens when people take out loans through a CDP) and increase supply, Maker proposed lowering stability fees.

In the short term, this might seem like a weird move for MKR holders, who you’d assume would prefer to keep the MKR supply lower rather than higher. If MKR holders were predominately day traders or short-term investors who wanted to pump up the price and then immediately sell them for a return, that might be the case. However, ultimately, longer-term MKR holders have an interest in increasing the demand for Dai and Maker, which necessitates maintaining Dai’s peg to the dollar and keeping the stability fee low enough that CDP-issued loans are attractive.

Therefore, the success of the proposal to decrease the stability fee, while seemingly against the interests of MKR holders in the short term, shouldn’t come as much of a surprise. Barrier to entry in MakerDAO voting processes is not inconsequential, requiring the creation of a voting contract, two MetaMask accounts, and some setup.

Voting on the proposal to reduce the stability back to 0.5 percent began on December 17, and ended today when the quorum of roughly 70,000 MKR was reached.

Alison is an editor and occasional writer for ETHNews. She has a master’s in English from the University of Wyoming. She lives with her pooch in Reno. Her favorite things to do include binge listening to podcasts, getting her chuckles via dog memes, and spending as much time outside as possible.