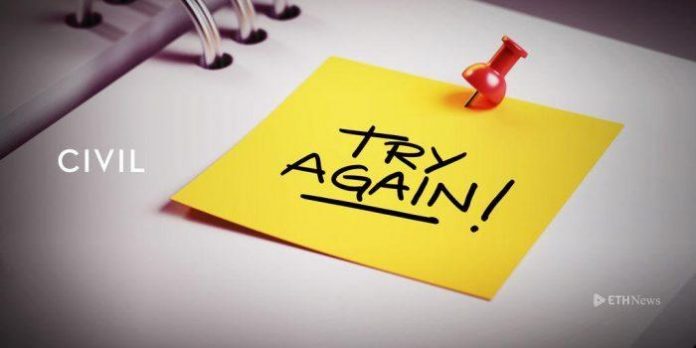 Civil could be a Wayback Machine for journalism. But the platform’s insistence on tokenizing content curation may lead it astray.

In May, Civil announced its ICO to much fanfare. Billing itself as “the decentralized communications protocol for journalists and citizens,” Civil wanted to use blockchain technology to create transparency between writers and readers while bucking censorship. According to the white paper: “Rather than a given platform or publisher dictating the content its readers can consume, a decentralized network of people curates newsrooms and content.”

But then Civil launched a token sale. Things didn’t go so well. Though Civil set a soft cap of $8 million, it sold less than $1.5 million. To be fair, at least some of the blame can be placed on the Rube Goldberg-like mechanics of the sale itself, which, by one estimate, required 44 distinct steps.

A blog post by Civil founder Matthew Iles yesterday, December 19, subtitled “Lessons learned, and turning the page,” parenthetically addresses that misfire. The prime lesson it has learned, Iles says, is that it let technology “overwhelm our message, complicate our experience, and distract from our core objectives.”

But as for the changes it’s making, there seems to be only one. The next Civil token sale will be “a bit easier” and continue until all 34 million publicly allocated CVL tokens sell.

It seems, however, that Civil’s crytpoeconomic structure needs adjusting. The white paper boasted two innovations: “economically incentivized self-governance and permanent recording of authorship and content.” These were seen as separate, and perhaps they should remain that way – an immutable record is the most valuable thing Civil has to offer.

Just this week, Popula, a media outlet that is part of Civil’s international journalism newsroom, archived the first full text on the Ethereum blockchain. The archived article, a 2017 article about Bill Cosby written by Maria Bustillos, was first published by Death and Taxes, a politics and culture website, in June, before disappearing during “corporate reshuffling” and being republished by Popula in September.

The announcement of the archiving notes that in the coming days, other publishers on the Civil network will begin to archive texts on the Ethereum blockchain. Bustillos also states that the pieces she wrote while covering the trial of Bollea v. Gawker will be archived in the future.

David Moore, an investigative journalist for Sludge, also part of Civil’s newsroom, tweeted about the archiving and Civil’s WordPress plugin, which Popula used to verify the article’s metadata. The plugin allows publications to create a newsroom EDCC (aka smart contract), apply to the Civil Registry, and sign, publish, and archive text from WordPress. (The Civil Registry allows anyone within the Civil network to read the published work.)

Essentially, Civil has created a Wayback Machine for journalism. That’s valuable for a couple of reasons. First, online articles can be modified at any time. While it’s standard journalistic practice to note corrections or adjustments, an article is always editable, not immutable. Unscrupulous journalists or publications could tweak their works in the face of criticism or even delete them. This, of course, would not be possible for articles posted on Ethereum through Civil’s plugin.

Second, censorship-resistant journalism made possible through Ethereum and Civil’s plugin could enable means to circumvent media suppression by governments or other authorities, enabling freer access to information. This might be appealing to both readers and media outlets. Readers benefit from having access to the information necessary to make informed decisions, empowering individuals and enabling democracy; journalists and media outlets benefit from their message reaching a wider audience.

But Matthew Iles didn’t found Civil for the sole purpose of censorship-resistant journalism. He founded the company because journalism has a funding problem, and he wanted to create a new economy for the industry. The Civil white paper blames the existing ad-based revenue model for the massive decline in journalism in recent years. It argues that because advertisers are choosing to give their money to social media platforms, rather than to the media makers themselves, news media has become unprofitable.

Civil’s token curated registry (TCR) was supposed to provide funding for newsrooms and promote ethical journalism, and it was based on those promises that Civil convinced newsrooms to sign on to the project. Abandoning those promises would be a significant admission of failure by Civil, without ever having truly tested its cryptoeconomic model. In that sense, it’s reticence to do so is understandable, but perhaps it should reconsider the facts in front of them. There’s no clear evidence that the funding and curation model would work, even if there was significant consumer interest – but it definitely won’t work if there are no token holders to curate the registry. Moreover, the token sale revealed a lack of consumer interest in Civil, despite heavy media coverage.

Maybe it’s time for Civil to quit beating this dead horse, and concentrate on the things it’s good at.