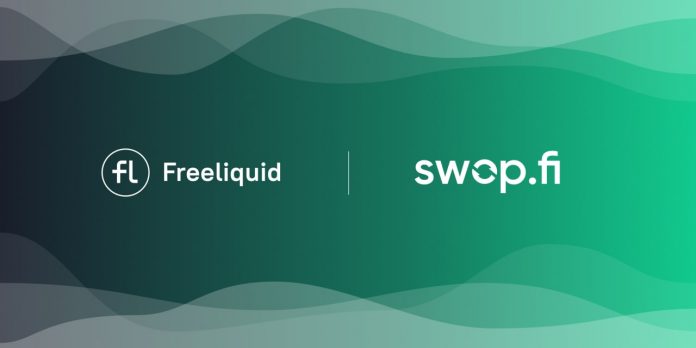 Any deFi enthusiast is well-aware of the benefits that can be reaped by successfully leveraging crypto-collateralized loans. Not only can you invest in emerging tokens without depositing additional fiat, but you can also do away with exchanging tokens and missing out on potential value growth.

In other words, liquidity providers in automated market makers (AMM) can collateralize their pool ownership tokens (LPs) to fund loans corresponding to 90% of their pool shares.

In doing so, one’s APYs can greatly increase since the loan can be utilized to provide additional liquidity, unlocking more LP tokens.

Additional collateralization yields additional capital that can be used for the same purpose. Double-digit APYs are easily obtainable, with no interest fees, risk of liquidation, or stability fees.

Moreover, Freeliquid provides highly-flexible loan terms, meaning that access to the collateralized LPs is regained whenever the loan is repaid, be it in a day or several months.

Seeing great community response, Freeliquid is actively working on further expanding its service, whilst incentivizing liquidity providers to support the protocol moving forward. As such, Freeliquid has just announced the launch of token pairs on Swop.Fi and the Waves Exchange, providing $SWOP rewards as well as the possibility to swap tokens at marginally lower fees.

Before discussing the particularities of the two new integrations, an understanding of Freeliquid’s tokens is warranted.

As such, the funding protocol issues two tokens – $FL and $USDFL. The former serves as a governance token designed to allow votes on all major protocol decisions. On the other hand, $USDFL is a dollar-pegged stablecoin used to fund all loans.

Since Freeliquid’s success depends on optimal liquidity volumes, user incentives are always on the table.

With this in mind, Swop.Fi is an AMM that has just launched a FL/USDN liquidity pair. Users who deposit both tokens in equal value are eligible to earn passive income in the form of transaction fees incurred by swapping between the two tokens.

A Swop community vote will soon take place to determine how many $SWOP tokens will be allocated to FL/USDFL pool participants as additional incentivising rewards. If things progress as planned, $SWOP rewards will commence on the 5th of April. $SWOP represents Swop.Fi’s governance token, having a similar use case to $FL.

The partnership between Freeliquid and the Waves Exchange is meant to reduce transaction commissions, as Waves is a centralized exchange that operates as an AMM, yet runs its own blockchain.

How to Use Freeliquid’s Lending Services?

Freeliquid currently operates off the Ethereum chain by collateralizing stablecoin LPs from Uniswap and Curve’s 3pool.

Protocol users who provide liquidity via the supported platforms  in USDT, USDC, and Dai are instantly eligible to fund USDFL-based loans. The process is both quick and simple, entailing no credit checks, identity checks, or other centralized shenanigans.

USDFL loans can be swapped to any cryptocurrency in hopes of attaining exposure to emerging coins, or simply utilised to provide additional liquidity.

By this point, Freeliquid has successfully completed its Q1 roadmap, yet many more developments are planned for the short-term future.

A relevant example would be the upcoming expansion to the Binance Smart Chain, as a way of mitigating the impact of gas fees on Freeliquid’s users, whilst tapping into a larger total addressable market.

Whilst the upcoming collateralizable liquidity pairs are yet to be announced, support for PancakeSwap’s LPs should be expected.

At press time, Freeliquid’s dev team is adapting the smart contracts to assure compatibility with BSC, while also working on an ETH-BSC bridge meant to allow seamless swaps of FL and USDFL between the ERC-20 and BEP-20 token standards.

Additional advancements are in works, with FL token holders expected to vote on these in the near future. To learn more, check out Freeliquid’s website, Medium, Twitter, and Telegram communities

After 12 years of existence, it was about time...
Read more