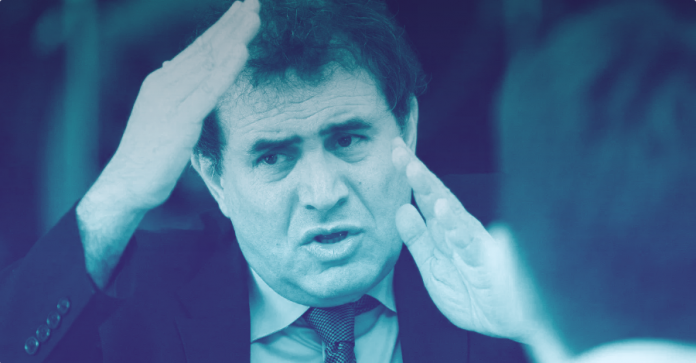 BitMEX CEO Arthur Hayes and well-known economist and crypto skeptic Nouriel Roubini—known affectionately as Dr. Doom—are all set for a showdown on stage at the 2019 Asia Blockchain Summit on Wednesday. But, for both men, the date can’t come soon enough–as they’ve been verbally sparring over the internet.

The opening salvo was fired by Hayes, after it tweeted a promotional poster dubbing the event, “The Tangle in Taipei.” The tweet also stated that traders on BitMEX had more than $1 billion in trading positions on its bitcoin to U.S. dollar trading pair. That was a red rag to the Roubini bull.

“How can one believe ANY of these figures when 95 percent of all bitcoin transactions on a typical exchange are fake? Fake-coins, shit-coins, fake-transactions, fake-pricing. The only true thing in crypto space is manipulation, pump n dump, front-running, wash trading, etc…” he tweeted.

Hayes fired back, “Maybe you should speak with my private bankers, they will inform you BitMEX don’t fake shit. Can’t wait to see you in Taipei XOXO.”

But Hayes wasn’t done. He followed up by highlighting that BitMEX has seen a trillion dollars in trading volume over the last year. An impressive statistic that’s likely to come up again on stage. It’s set to be a thrilling fight.

In previous duels, Roubini, who has taken on everyone from derivatives trader Tone Vays, Galaxy’s Mike Novogratz, and Ethereum co-founder Vitalik Buterin has held his own.

In April, Decrypt covered Roubini vs. Buterin in Seoul. At the time he led a scathing attack on all-things-crypto, dismissing the space as a hive of “shady activities.” Buterin’s response? A largely technical argument based on experimental cryptography. If anything, Roubini had the upper hand as the better speaker but struggling to get his voice heard above the crypto maximalists in the audience. Tough to call a winner, so we called it a score draw.

However, Wednesday’s debate is set to be a thriller. Not only has Hayes shown that he is gearing up for a fight—with statistics in the arsenal—but he is a confident speaker with much experience. And he, like Roubini, is not one to back down from a fight.

As always, Decrypt will be there to bring you the highlights. Stay tuned.