BetTronLive Launches the Next Generation in Live Dealer Casinos 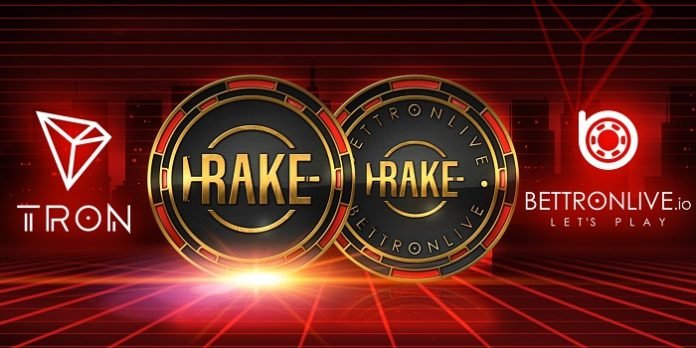 New York, New York, July 21, 2019, In this new digital age, blockchain technology has reached all sectors of our global way of life. Online gaming has already made its way onto the Blockchain, but BetTronLive had a better idea when they launched their new platform based on the TRON network blockchain.

BetTronLive has introduced a new plug-and-play casino platform built on top of the TRON network for a new generation of casinos, affiliates and players.

BetTronLive’s proof-of-play algorithm lets players mine RAKE tokens just by playing certain games on the platform or viewing ads. At the end of every play, users will be able to claim their tokens directly into their wallets. RAKE is a TRC-20 token. Blockchain technology allows players complete freedom to transfer RAKE tokens between each other or just hold them in a safe place.

The live dealer feature of BetTronLive will bring the same atmosphere that players would get at a table in any land-based casinos around the world without physically visiting. Players will see the croupiers deal their cards or spin the roulette wheel – all in real-time. An integrated live chat will create an extensive online community of dealers and players.

Users access the BetTronLive platform through a desktop version that can be opened on any PC, notebook, tablet, Windows or Android phone for ease and convenience. BetTronLive offers several options to advertisers, including a cost per mille or per banner/time basis. Advertisers gain access to a global community of players. All revenue from advertising will be displayed transparently to all users with 50% being redistributed to all RAKE holders.

Players will be given the option to view short video ads before they play the live dealer games. They will be rewarded with RAKE tokens for watching these ads. This is a model that benefits everyone involved and grows the ecosystem, giving users of the platform an additional source of revenue.

BetTronLive will start with a few popular games and then gradually expand to include well-developed dice games, poker games, RNG games, sports bookies, slot machines and even Bingo to attract more players.

Players will enjoy action and games such as:

To further drive the value of the RAKE token, only 100,000,000 tokens will be minted, and this number will never be increased.

To ensure the success of the platform and continuous expansion of its user base, BetTronLive will introduce a Community Payday Pot that is set to withdraw every week. There will also be a random release on occasion, depending on the algorithm. This will give RAKE token holders extra incentives to hold onto their tokens and thus further drive the value of the token.

Dividends are paid in TRX tokens at the end of each mining level and the countdown timer for each level can be checked on BetTronLive’s website. After the process of mining ends, dividends will be paid out automatically every day. The dividend pool consists of all wagers made and losses incurred by players. Wagers and losses go into the dividend pool that gets redistributed to RAKE holders. The more they play, the more RAKE they will have, and the more dividends they will receive.

An in-depth discussion about the BetTronLive platform can be viewed in the whitepaper here.

For complete information about this unique opportunity, visit: https://bettronlive.io

Pando Coin, regarded as one of the pioneers in...
Read more
Press Releases