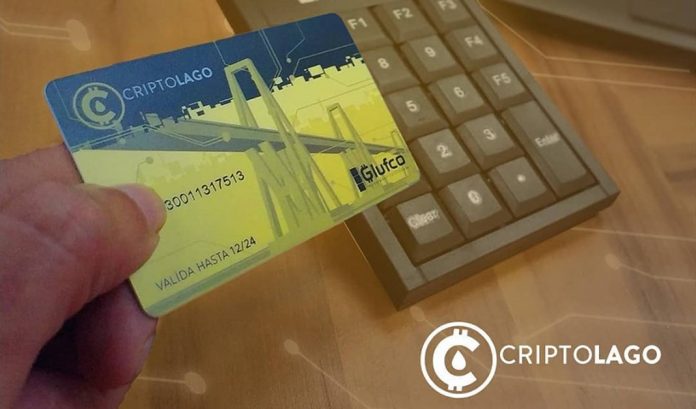 CriptoLAGO, a state-licensed cryptocurrency exchange in Venezuela, is launching a new cryptocurrency debit card that will allow consumers to more easily spend Dash, Bitcoin, and Ethereum, as well as the state cryptocurrency, the Petro.

CriptoLAGO announced the integration on social media and highlighted that the debit card is being offered through a partnership with “investment cryptobank” Glufco. Glufco will enable the transfer of cryptocurrency from the consumer’s wallet to the merchant’s wallet, and CriptoLAGO will then facilitate any exchanges into fiat currency, specifically Venezuelan bolivars. The card will cost 0.02 petros, which is around 25,000 bolivars (~ $1.30 USD at the time of publishing).

The integration comes at a time when cryptocurrency use in Venezuela continues to accelerate, with trading on LocalBitcoins up 48% last month and hit a new record in volume. Additionally, the Venezuelan central bank has been pondering the possibility of holding cryptocurrencies and more banks are embracing the petro, the state-backed cryptocurrency.

CriptoLAGO launching a cryptocurrency debit card comes as Venezuela’s inflation ballooning to over 10 million percent within the past year and the country owing over $100 billion USD to foreign creditors. The IMF is projecting inflation to dip back below 1 million percent soon due to beneficial policies by the central bank, however this does not change the fact that their economy will soon have shrank over 65% since 2013, and is projected to shrink 35% in 2019 alone. The oil-rich country now in some cases has many of its citizens struggling for basic necessities. Cryptocurrency, while not necessarily providing an easy and quick solution to immediate problems, nevertheless has the potential to help ensure that similar hyperinflation-triggered situations do not happen again.

Cryptocurrencies with a fixed issuance provide protection in favor of individuals against central banks attempting to simply inflate their way out of debt. Additionally, since cryptocurrency is a diverse market within itself, individuals have the freedom and power to use and save whichever coin they believe are not only the most secure, but also the most financial sound over time.

Dash is heavily used within Venezuela

In addition to projects such as CriptoLAGO, Dash has a major cryptocurrency adoption presence in Venezuela. Currently a significant number of merchants in the country accept Dash through direct adoption campaigns by different outreach groups as well as through partner integrations. One example, exchange and merchant solution company Cryptobuyer, integrated Dash including at numerous Traki department stores across Venezuela. Services like Dash Text that enable Venezuelans that do not own smartphones (around 60% of the population) to send and receive Dash via SMS text, which also continued to work during wide spread blackouts throughout the country. Dash Text has also been working hard to give back to the Venezuelan community and develop a decentralized charity program, currently enrolling 100 students, so future donations to individuals are not skimmed by corrupt officials.

Ryan Taylor, CEO of Dash Core, continues to “stand by the statement that Dash is the most-used cryptocurrency in Venezuela” as it is seeing adoption in all types of sectors from food, clothing, department stores, pharmacies, parking garages, and more.