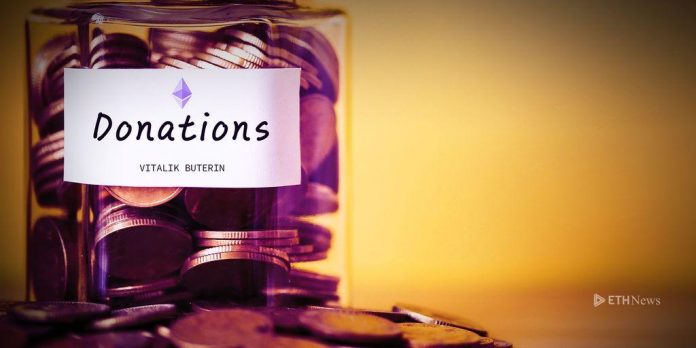 Buterin’s first 1,000 ETH donation came after Preston Van Loon, co-founder of Prysmatic Labs, which is working on Ethereum 2.0 scalability, tweeted on the thread that, even with grants, “it’s hardly enough to take the whole team full time with significant pay cuts and it’s certainly not even for us to scale the team to where we need it.”

The second donation was awarded to Sigma Prime – which is building an Ethereum 2.0 client called Lighthouse – when co-founder Paul Hauner tweeted that the startup could turn 1,000 ETH into more developers. Buterin donated the ETH and claimed to be done for the day.

Finally, Mikerah Quintyne-Collins, project lead for ChainSafe Systems, which is also building an Ethereum 2.0 client, tweeted, “I will quite literally drop out if we got $100k in ETH.” Buterin then donated the ETH.

Buterin’s charitable spirit wasn’t ignored by the crypto community on Twitter. Nye, founder of blockchain social media startup Elevated District, applauded Buterin’s donations, while Aleksandr Bulkin and Evan Van Ness questioned the process of a “50 second grant application on twitter” and whether or not Buterin’s focus should be on state channel and Plasma projects instead of Ethereum 2.0 clients.

Notably, Buterin’s last donation to ChainSafe drew the attention of Ethereum Foundation team leader Péter Szilágyi. In response to Quintyne-Collins’ promise to drop out for $100,000 in ETH, Szilágyi tweeted, “Just because a dropout got lucky doesn’t mean everyone will,” in reference to Buterin.

Szilágyi continued, stating Buterin’s donations were “insanely reckless” toward the entire Ethereum ecosystem, even with the donations coming directly from Buterin and not the Ethereum Foundation. Szilágyi added that the donations undermined the entire idea of the foundation’s grant system, and that all this proved is that as long as developers are working on something Buterin likes, “he’ll bring the lambos.”

Recently, in November, Buterin told MIT Technology Review that it was time for him to start fading into the background in order to benefit the growth of the Ethereum community. But randomly deciding to give 1,000 ETH to three Ethereum 2.0 startups hardly seems like taking a step back from the community.

As Szilágyi commented on in his tweets, the Ethereum Foundation does have a grants system, which, as recently as October, awarded Sigma Prime with a $150,000 grant and Prysmatic Labs with a $500,000 grant. Although, as Van Loon stated in his original donation-starting tweet, this apparently is not enough to maintain a full-time team of developers.

Essentially, the Ethereum developers can’t get enough money to actually develop with the urgency that Ameen Soleimani, CEO of SpankChain, said Ethereum needs to take back the lead it has taken for granted for two years. At the same time, Buterin finds himself in a quandary – invested in the future success of the network but wanting to legitimize, in a sense, the decentralized nature of the blockchain by removing himself as the quasi-third-party central point of success/failure.

Stay with me here, but it’s like Ethereum is a television show, and Buterin’s charitability is a singular watershed-moment episode; an episode that both comments on – accidentally or not – the state of the series at that specific point in time and goes on to (possibly) forever affect how the series continues to present itself.

Ethereum wants to work as a television show, but actors like Prysmatic Labs and ChainSafe Systems and Sigma Prime can’t be the fully developed characters they want to be. Maybe this is the moment where the characters get bitten by a zombie. It’s not the best thing to happen, but now the plot is at least spurred on by a need to find a cure. We just have to wait and see if – and hope that – there will be a satisfying ending.