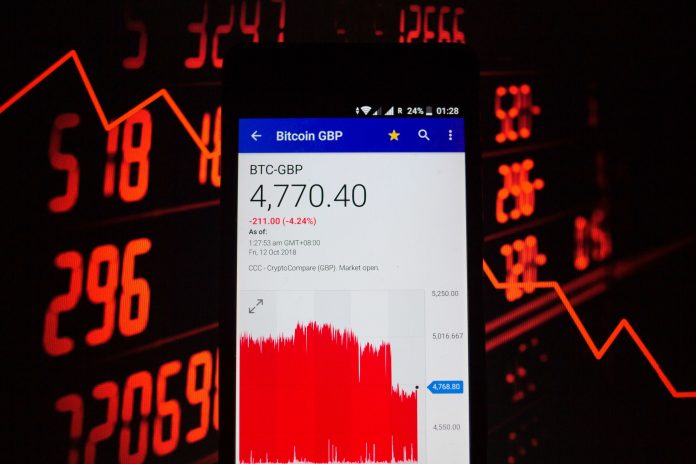 Bitcoin plunged to its lowest level since June on Tuesday.

The world’s most popular cryptocurrency fell as much as 15% to a low of $7,944.33, according to industry site CoinDesk. That marks bitcoin’s lowest level in four months, and first time below $8,000 since mid-June.

Analysts pointed to a number of reasons for the dip, including the cryptocurrency breaking a key resistance level. Brian Kelly, CEO of BKCM, told CNBC that $9,000 was a “major support” level — when bitcoin broke broke below that, a “wave of selling” was triggered.

The price plunge comes days after the Intercontinental Exchange, parent company of the New York Stock Exchange, launched its bitcoin futures contracts as a way to usher in investors who have been hesitant about trading cryptocurrency. Those futures are “physically deliverable,” meaning they pay out in bitcoin instead of those from ICE competitor CME Group, which introduced its own futures contracts two years ago that pay out in cash.

Joe DiPasquale CEO of BitBull Capital said the price breakdown was partially due to a “lukewarm” reception of the new bitcoin derivative. He also pointed to a sudden decline in the bitcoin network’s “hash rate,” a measure of the total computing power of bitcoin miners around the world, over the last 24 hours. But he said that that is likely a “temporary fluctuation.”

“Bakkt’s futures will gather traction in time and it is too early to judge the service based on initial volume,” DiPasquale said. “Ultimately, Bitcoin’s fundamentals remain strong and we expect the price to recover back towards $10,000 in the coming days.”

Other “alt coins,” or alternative cryptocurrencies to bitcoin, also tumbled. Ether and Litecoin both fell as much as 20%.

Bitcoin has seen other notable bouts of volatility throughout its ten-year existence. The cryptocurrency rallied to almost $20,000 at the end of 2017, only to come crashing down the following year. Bitcoin has more than doubled in price this year. This summer, Facebook announced its own planned libra cryptocurrency, which analysts say has contributed to positive sentiment around bitcoin and boosted its price.