Bitcoin bull Michael Novogratz is seeing the same rush of enthusiasm toward Beyond Meat that came at the height of the crypto bubble.

“Beyond Meat reminds me a little bit of crypto in 2017,” Novogratz told CNBC’s “Squawk Box ” on Thursday. “You get great bubbles on big ideas. This is a great bubble.”

The plant-based meat maker has been on a tear since its IPO in May. Last week, shares hit an all-time high of $208.48, a 720% rally since the IPO. But the hot streak snapped this week after the company posted mixed second-quarter earnings.

Shares continued to stumble Thursday, dropping 10%, after the company announced a secondary stock offering at $160 — an 18.6% discount from Wednesday’s closing price. Beyond Meat plans to sell an additional 3.25 million shares with 3 million coming from investors and 250,000 from the company. 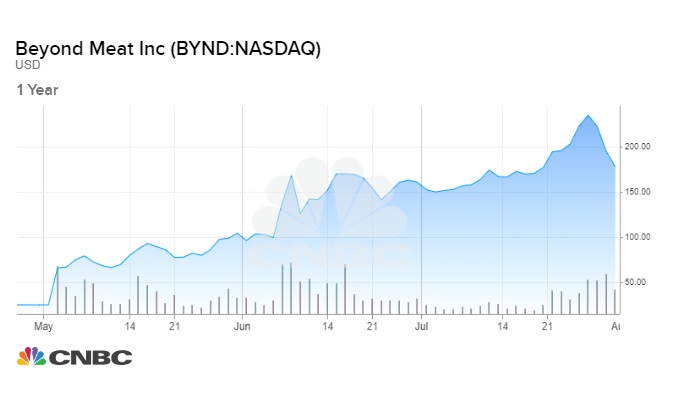 As more shares come on the market and the lock up period for employees ends, Novogratz predicts a steep decline in Beyond Meat’s share price.

Much like bitcoin, Beyond Meat is trading at a “ludicrous price, but everyone gets sucked in,” said Novogratz, who is also a former Goldman Sachs macro trader.

“All the young guys on their Robinhood accounts are buying this. This is their crypto,” he said.

Novogratz was an early bitcoin investor and started a cryptocurrency-focused merchant bank Galaxy Digital, which went public on a Canadian stock exchange last year during what many called “crypto winter.” Cryptocurrency became a poster child for retail-driven bubbles after bitcoin rallied to almost $20,000 at the end of 2017, only to come crashing down the following year.