The Ether.Cards framework to launch on March 18th amid NFT Mania 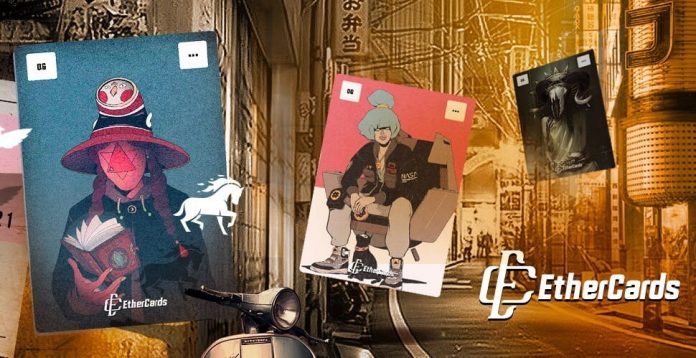 While Bitcoin’s market capitalization crossed $1 trillion for the first time ever on Feb.19, the Non Fungible Token (NFT) market has been booming like never before as well.

As pointed out by crypto-asset investment firm, Paradigm, co-founder Matt Huang on Twitter, over $100 million of crypto-collectibles (NFT’s) were sold in the last 30 days.

To aid this expanding marketplace, NFT startup EtherCards is launching the platform’s framework on March 18th. This framework would allow participants to maximize the opportunities and value offered by the NFT tokens which they choose.

EtherCard’s platform is a community-driven NFT framework that is built to facilitate the expansion of the NFT marketplace capabilities beyond the existing industry standards and provides access to various utilities like bingos, raffles, and bounties.

EtherCard’s tokens are designed to be similar to a priority membership card that gives holders access to a range of benefits.

These benefits range from discounts, free services to royalty contracts, and various other bonuses while gamifying a large portion of the NFT experience for their participants.

This innovative use of gamification in NFT’s is a unique proposition that EtherCards provides through this new framework over existing marketplace competitors.

The cards would be of various rarity levels offering different value propositions that entail levels of financial and logistical advantages, with the best of these cards to be distributed on a first come-first served basis post the launch on March 18th.

To ensure fairness of the distribution feature, EtherCard will use Chainlink’s Verifiable Random Functions (VRF’s) that guarantees randomness at the point of sale.

To incentivize new users on the launch, EtherCards have announced that the EtherCard tokens launching on launch day i.e. March 18th will offer advantages beyond any of those offered by any of the collections released in the future.

Some of the cards will offer the following features from launch till the end of March: 1% royalty on the fees paid to the EtherCards contract, multi-use perpetual discounts on EtherCard’s assets and services and even provide perpetual fee waivers.

There are a bunch of features that EtherCards offer it’s participants at launch, namely, Monetization, Free Services, Discounts, Extra and Get Lucky.

‘Free Services’ are features offered especially to creators and artists offering them extra value of the EtherCard. The EtherCards traits would offer them free services on the platform ranging from but not limited to creating a raffle without incurring setup fees to creating a bingo. In rare cases, the trait might even offer all of EtherCards services free to the card holder, including ones released in the future.

EtherCards holding the ‘Discount’ trait might offer a discount ranging from 5% to 25% to all the items in the store. The ‘Special’ trait on select cards would grant holders one to three tickets every time they participate in a raffle, thus increasing their chances of winning.

The ‘Get Lucky’ trait on the cards would increase the holder’s chances of acquiring higher quality and rarer cards from bling bags thus leading to a whole array of advantages for the holders.

Types of EtherCard collections & the importance of their serial numbers

EtherCards are divided based on their serial numbers into collections. The shorter the serial number of the card, the better features it offers. On launch day, there will be three collections available.

The Original Gangster (OG) card collection, with 90 cards having serial numbers from 10 to 99. The advantage of OG cards is that they would have three times more chances of having special features than normal cards.

The Alpha card collection, with 900 cards having serial numbers from 100 to 999. These cards would have 2 times the chances of having special traits than normal cards.

The Common card collection, with 9000 cards having serial numbers from 1000 to 9999. Even though these are normal cards, they can also get any of the special traits with lower chances than the aforementioned cards of course.

The increasing popularity of NFT’s is evident in the fact that now it has an endorsement from Christie’s auction house and Mark Cuban being bullish on them. EtherCards expects to step into this thriving market with its tailored gamified platform that benefits both artists/creators and the other cardholders as well.

Any deFi enthusiast is well-aware of the benefits that...
Read more
Press Releases