Bitcoin emerges as the big winner this month in the financial markets, soaring nearly 70% The world’s first and largest cryptocurrency was one of the biggest winners this month.

Bart Smith, head of digital assets at Susquehanna, said the crypto rally was driven by a few different factors — including simmering trade tensions.

“The first is the net effect of the trade war with china and the U.S. is that the yuan is hitting a six-month low,” Smith told CNBC’s Squawk Box Thursday, adding that much of the interest came from China. “Bitcoin was either a hedge or just an outright way to get capital outside of that country.”

Global equity markets stumbled this month as the world’s two largest economies remain locked in a stalemate over trade. Jeff Dorman, chief investment officer at Los Angeles-based digital asset manager Arca said that was top of mind for investors, especially as the Chinese yuan fell against the U.S. dollar.

“Chinese investors and the overall population know this, and are worried about protecting their capital and their purchasing power,” Dorman said. “This leads to capital outflows, and Bitcoin and other digital assets are a ‘safe haven’ for them.” 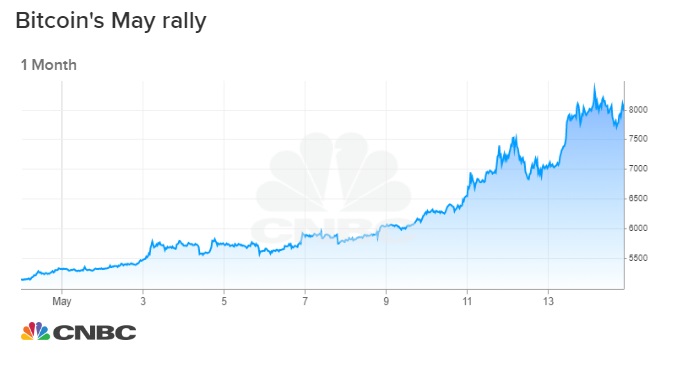 The cryptocurrency became a household name at the end of 2017 as it marched to almost $20,000. Bitcoin has yet to recover to anywhere near that level, but climbed to a 52-week high this week. Bitcoin futures are also on pace for their best month ever, back to their inception in December 2017. Futures are heading for their fourth consecutive month of gains.

Still, bitcoin has not quite caught on as a means of payment. Crypto bulls instead advocate its use-case as a store of value, or “digital gold.”

“Bitcoin is not going to be a payment currency — it’s going to be just like gold,” Michael Novogratz, head of cryptocurrency merchant bank Galaxy Digital and a former Fortress hedge-fund manager, told CNBC last week. “It won that lane.”

Brian Kelly, founder and CEO of BKCM, also pointed out that Asia “was quiet for a long time, but it appears there is appetite for bitcoin again.”Investors are also anticipating demand from Fidelity and TD Ameritrade, he said.

Fidelity’s cryptocurrency platform Fidelity Digital Assets will reportedly offer trading for institutional customers a matter of weeks, according to Bloomberg. Fidelity told CNBC in March that it has quietly rolled out its cryptocurrency custody and trade execution operations. In the past few months it has been up and running with institutional investors like hedge funds and family offices, according to its top executive Tom Jessop. Robinhood, Square and E-Trade Financial are also offering crypto buying to retail investors.

“There’s a tremendous optimism about online brokerages offering bitcoin to retail customers in 2019,” Susquehanna’s Smith said. “I think people are buying bitcoin ahead of that new investor demand.”

But skeptics still abound. Economist Nouriel Roubini, known as “Dr. Doom” for predicting the financial crisis, said in a May debate with Novogratz that bitcoin and its peers don’t even deserve to be called “cryptocurrencies” and are the “mother and father of all bubbles.”

A study released in March from cryptocurrency firm Bitwise found that 95% of spot bitcoin trading volume is faked by unregulated exchanges, casting even more doubt on the legitimacy of trading it. The firm analyzed the top 81 crypto exchanges by volume on industry site CoinMarketCap.com, which report an aggregated $6 billion in average daily bitcoin volume. The study finds that only $273 million of that is legitimate.

“It’s risky and risk in and of itself should have returns associated with it,” Smith said. “The question is, do you understand the risk and are you taking the appropriate amount.”