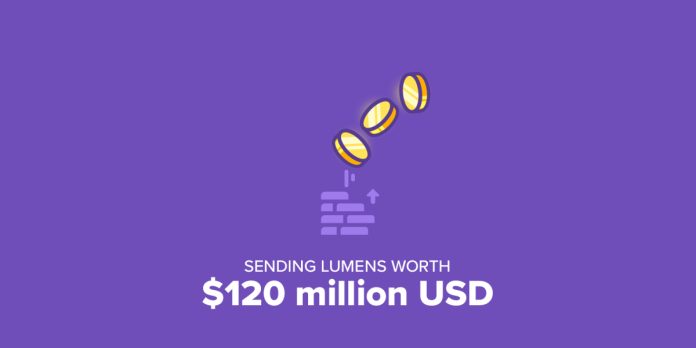 Keybase, which has hundreds of thousands of users, plans over the next 20 months to give away a total of 2 billion Lumens, more than any other promotional Stellar handout to date. At press time, the exchange exchange rate for 1 Lumen was $0.06, equating to roughly $120 million total.

Keybase disbursed its first tranche of the cryptocurrency into existing users’ accounts on Monday. The handout consisted of 100 million Lumens, worth roughly $6 million.

Lumens, known by the ticker symbol XLM, are a top 15 cryptocurrency, with a total market value exceeding $1 billion, per CoinMarketCap, a cryptocurrency price-tracking website. Lumens are also one of the worst performing cryptocurrencies in recent months, its value having roughly halved over the past year.

Such giveaways, known as “airdrops” among cryptocurrency enthusiasts, are a tactic used to seed markets and to attract investors and developers. Keybase’s promotion, notable for its size, intends to lure people to the company’s secure messaging software, which positions itself as a rival to Slack, Microsoft Teams, Atlassian’s HipChat—and now, perhaps, to a growing crop of would-be digital wallet-cum-chat app purveyors as well, such as Facebook and Telegram.

Founded in 2014, Keybase was created by the entrepreneurs behind OkCupid, the dating service, and SparkNotes, the online cheat-sheet. The 23-person company began receiving grant funding from Stellar a year and a half ago.

Max Krohn, CEO and cofounder of Keybase, tells Fortune that his firm’s airdrop differs from those previous ones because it takes place on a chat app rather than a cryptocurrency exchange where people might be encouraged to cash out immediately. Instead, Krohn hopes people will transact with the cryptocurrency in-app, sending it to contacts and paying for various services offered by chat bots.

“We hope to see everything from basic payment back for lunch to new things we haven’t even thought about,” Krohn says. One bot created as a hobby project by a Keybase developer already sells temporary cellphone numbers to privacy-minded purchasers.

Denelle Dixon, CEO and executive director of the Stellar Development Foundation, an organization tasked with shepherding Stellar’s codebase and funding developer projects, says she sees the Keybase giveaway as an “opportunity for growth.”

Dixon, the former chief operating officer of the Mozilla Foundation, maker of the popular FireFox-branded web browsers, helps manage the foundation’s treasury, which contains tens of billions of Lumens, the vast majority of the total supply of the cryptocurrency.

“We’re extremely optimistic that by blasting out this 2 billion Lumens, we’ll really be able to bootstrap the network—getting people to use this cryptocurrency for things other than just HODLing,” Krohn tells Fortune, using crypto-slang for “holding,” or sitting on funds as a passive investor.

For cryptocurrency investors, HODLing Lumens may not be such a good idea. Ryan Selkis, CEO and founder of Messari.io, a cryptocurrency market analysis firm, warns that he sees “no end in site for the selling pressure” on Lumens as the foundation continues to pump more of the cryptocurrency into the market.

Given all the Stellar foundation’s giveaways, the price “won’t go anywhere but down,” he forecasts.

—What do bitcoin and Las Vegas have in common? The size of their carbon footprints
—Finance and tech execs opine about how millennials invest
—How the media shapes the crypto industry
—7 CEOs on the future of Bitcoin
—This ex-Fannie Mae CEO says housing will be fine in the next recession
Sign up for The Ledger, a weekly newsletter on the intersection of technology and finance.