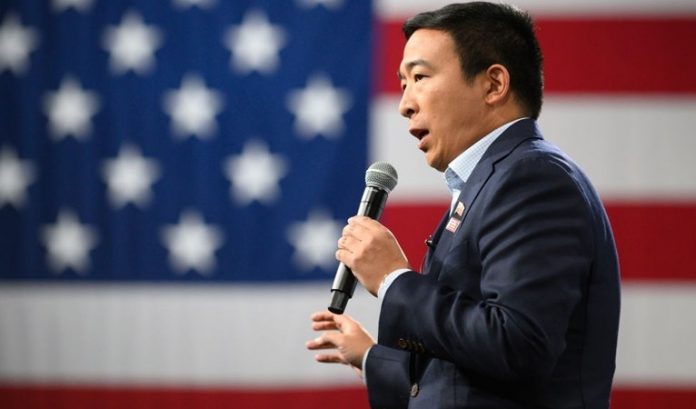 United States Presidential candidate, Andrew Yang has expressed his open-mindedness towards the adoption of blockchain technology in voting during electoral processes in the country. He said this while discussing issues surrounding emerging technologies and how it affects humanity during an interview session on the program, “The Tipsy Bartender”.

During a Facebook AMA I was asked about crypto and blockchain. I think the technology has massive potential to create a more transparent society. A smart government would embrace this and work with it. I would do that. pic.twitter.com/Vn2vYvKDSg

Yang acknowledged his appeal towards blockchain and other technological developments. He also stated that at the current stage of blockchain development, implementing it in voting will require a paper voting backup. However, from a more general angle, Yang made is clear that technological advancement is upon us, and humanity must make adjustments in order to cope with the geometric changes that are confronting us already:

“One of my initiatives is that I want to move us toward online voting, but the reality is for the next at least couple of elections we would need to have a paper backup, because right now it’s not quite as secure as we need it to be, and the blockchain can’t support activities at quite that scale yet. Potentially it could, and I’m 100% on board with moving us in that direction, because it would be transformative for democracy if we could just vote easily and we had total confidence in it.”

The technological advancements that we see today are elements of revolution. They are truly redefining how processes are executed. In places like China, robots are already replacing humans in carrying out routine tasks. Computer algorithms as we know them are changing everyday by exponential measures.

One key revolutionary that arrived in the technological ecosystem is the Decentralized Autonomous Organisation (DAO). Unfortunately, when DAO is mentioned today, what comes to mind for many people is the unfortunate breach of the Ethereum platform in 2016. During the breach, the DAO protocol the platform was compromised and a huge amount of funds was stolen. That singular event shook the blockchain industry and caused a split in the Ethereum blockchain, giving but to the new Ethereum. But this does not take away the true identity of the DAO protocol and the many benefits that it offers.

Like the name represents, DAO implies that the platform must be free of any form of centralized control. Anyone from anywhere can become a member of the community and have equal rights as every other member, even the founder. Therefore, to make decisions on a DAO, every member has the power to participate fully. DAO protocols are also autonomous and does not rely on any individual or group for sustainability. A DAO must be self-sustaining, especially in terms of sponsorship, where funds are involved. This makes the system independent and self-reliant. Freeing it from the influence of external powerful forces, just like the typical government systems that we have in most parts of the world.

The third characteristic of a DAO is that it must be well organized from the word go. The rules must be clear and applicable to every member of the organization. With this, there will be no room for manipulation or lopsided administration. Every aspect of the system is catered for from the beginning. From Yang’s interview, this is the kind of system that he might be looking forward to before we can say that blockchain technology has arrived in the mainstream.

Dash has implemented DAO for four years and counting

For four years now, Digital Cash (DASH) has been running a DAO. The miner/masternode/treasury combination in the DASH ecosystem completely satisfies the requirements of the DAO. Miners on the network are comprised of individuals from different walks of life across the globe who do not need any secondary approval to join the network. On the network, participants can either earn DASH as rewards for mining activities or purchase them. Members of the network that have accumulated enough DASH can decide to run masternodes. This grants them independent rights to vote and be a part of the decision making structure of the network. Then the treasury, which is an accumulation of a portion of all the new funds created in the network is used to fund development and pay any financial requirements as agreed by the masternodes.

All of the above mentioned processes are run on a predetermined rule-set that defines the organization. This ensures a fully democratized system that is not influenced by any particular entity. Dash’s example has led to many other projects following its lead in implementing governance, such as Decred, Horizen, PIVX, and others.