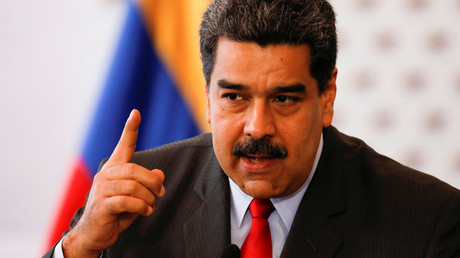 A new war of words has broken out between Washington and Caracas after President Donald Trump banned the use of the oil-backed cryptocurrency launched by Venezuela in a bid to undermine the dominance of the petro-dollar.

Trump signed an executive order late on Monday prohibiting trade in the Venezuelan government’s newly-launched Petro cryptocurrency in the US. The order bans “all transactions related to, provision of financing for, and other dealings in, by a United States person or within the United States, any digital currency, digital coin, or digital token,” issued by Venezuela’s government since January 9, a White House statement said.

“The ‘petro’ is a desperate effort by a corrupt regime to defraud international investors,” one senior administration official said. “Investing in the ‘petro’ should be viewed as directly supporting this dictatorship and its attempts to undermine the democratic order in Venezuela.”

United Socialist Party leader Nicolás Maduro hit back in an official statement, condemning the “new sanctions by the Donald Trump regime.” Maduro added that the move was “in violation of the United Nations Charter” and a “new imperial aggression orientated to intensify the attack on our people.”

Maduro went as far as to call the new sanctions a “crime against humanity” that should be prosecuted in the International Criminal Court (ICC) in The Hague, under Article 7 of the court’s founding Rome Statute.

While the US is not a signatory to that statute and remains outside the ICC’s jurisdiction, in February the court’s prosecutor Fatou Bensouda said she was launching a probe into possible offenses by Venezuelan security forces chiefs during four months of opposition-led riots last year. The violence, aimed at overthrowing the government, left 124 people dead, including several that were burnt alive by protesters.

Maduro’s presidency, which began with the premature death of his predecessor mentor Hugo Chavez, has been mired in an economic crisis of hyperinflation and consumer shortages that the government blames on US economic warfare and domestic black marketeers.

Trump and his predecessor, Barack Obama, have slapped an escalating series of sanctions on Caracas over the socialist government calling, and winning, a series of elections, despite objections from the Democratic Unity Roundtable (MUD) coalition of opposition parties.

Unlike other cryptocurrencies, such as Bitcoin, the Petro is backed by the concrete assets of Venezuela’s oil and other natural resources. It was explicitly launched to circumvent US sanctions on state oil company PDVSA. Maduro vowed that, despite the sanctions, Venezuela would continue pushing forward the domestic blockchain technology and “make the Petro one of the most solid and trustworthy cryptocurrencies in the world.”