UNICEF Is Asking Gamers to Mine Cryptocurrency for Syrian Children 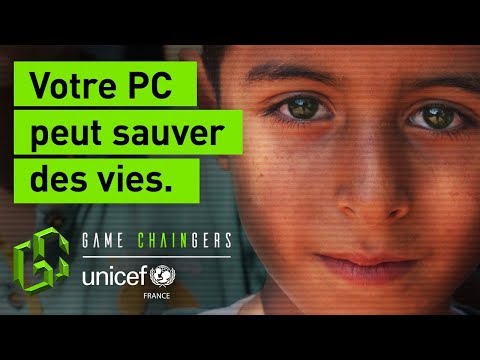 The Syrian Civil War has raged for almost seven years and killed tens of millions of people. Survivors of the brutal conflict either stay and become internally displaced or flee and become refugees. As basic services break down, survivors need support from the international community just to survive.

The United Nations Children’s Fund (UNICEF) thinks gamers and cryptocurrency can help with that.

On February 2, the UN led humanitarian aid program launched Game Chaingers—a fundraising initiative that aims to use blockchain technology to raise money for Syrian children. According to UNICEF, 9 million Syrian children are on the verge of losing all “vital emergency help.” The plan is simple—UNICEF is calling on gamers to hook up their graphics cards to the blockchain to mine ether, the in-house cryptocurrency of the Ethereum blockchain, for charity.

To generate new digital coins through the process known as “mining,” people dedicate their computers to doing complex math in order to securely add the next block of transaction data to the Ethereum blockchain. The reward for that work is some cryptocurrency. The powerful graphics cards that gamers use to render the latest games are particularly well-suited to performing these operations.

“Thanks to the work of their graphics cards donors no longer need to give a single euro to support the action of UNICEF,” the organization said in a video explaining the campaign. UNICEF said it sought out gamers because they are “activist, supportive,” and already have the powerful graphics cards needed to mine cryptocurrencies.

The Game Chaingers initiative is the result of a partnership between UNICEF and French ad agency BETC.

“We were asking to ourselves, ‘Where can we find out the largest amount of powerful (and available) graphics cards to generate funds for an organization?’” BETC spokesperson Bao Tu-Ngoc wrote me in an email. “After 10 minutes, the answer was obvious: The gamers.”

Gamers who want to participate should go to the Game Chaingers website, install the third-party Claymore mining program, and let their graphics card do the work. Their machines will be contributing to the existing Ethermine mining pool, and payouts will be made to UNICEF. Like any good video game, Game Chaingers keeps track of player stats. As of this writing, according to UNICEF, 513 miners have raised more than €1,400 (around $1,700), and User “ANTONYMOUS” is at the top of the charts for having done the most work.

UNICEF has recently been looking at ways to integrate blockchain technology and cryptocurrencies into its work. For example, UNICEF is currently accepting applications for blockchain startups to fund with $50-90,000 in seed finance. Other United Nations aid groups have looked into blockchain tech, too: In 2017 the World Food Program began tracking aid on a blockchain.

People can also just make direct cash or cryptocurrency donations to UNICEF instead of taxing the power grid to generate cryptocurrency directly, although it should be noted that even simply transferring cryptocurrency incurs an environmental cost when the transaction is eventually mined into a block.

Game Chaingers is part of a broader trend of charities and non-profits using the blockchain technology to help people. Bail Bloc is another that’s using cryptocurrency to bail people out of jail when they can’t afford it. Both Game Chaingers and Bail Bloc are a positive use of a technology that’s still controversial for lawmakers.