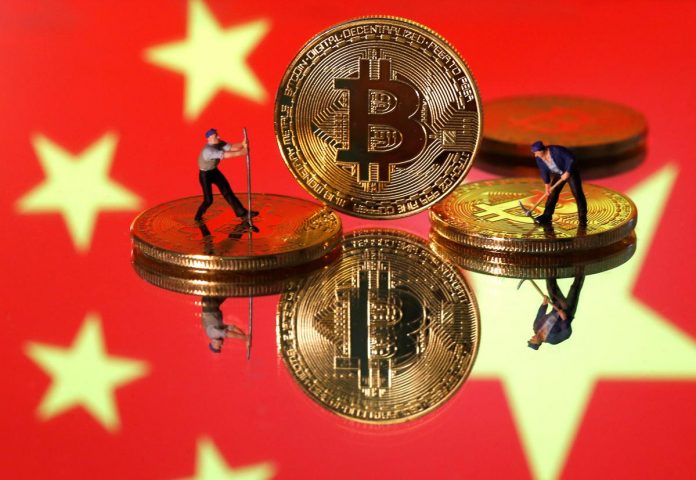 LONDON/NEW YORK (Reuters) – Trade tensions between the United States and China and a weakening yuan are boosting demand for cryptocurrencies among Chinese investors, market players from Asia to New York said.

Exchanges, researchers and brokers told Reuters they have seen an uptick in activity at crypto trading venues popular with Chinese. They said over-the-counter (OTC) brokers, which act as middlemen for buyers and sellers, have seen much of the activity.

While digital wallets used to send and receive coins can be tracked on the blockchain technology that underpins most coins, the geographical location of senders cannot. And the Chinese government’s 2017 ban on crypto platforms means there is little data on the sector in the country.

Still, the impact of the U.S-Sino trade war on China’s economy and its falling currency are driving some larger investors to shift money from the yuan to cryptocurrencies, said Andy Chung, head of operations at OKEx, a Malta-based platform popular among Chinese.

China’s economy has been hit by simmering trade tensions between Washington and Beijing. Data on Wednesday showed the slowest growth for Chinese industrial output in 17 years, suggesting tariffs are impacting demand in the world’s second-largest economy.

And last week, China allowed the yuan to break through the key 7-per-dollar level for the first time since 2008, prompting Washington to label Beijing a currency manipulator and upsetting markets.

The yuan’s sharp fall on Aug. 5 coincided with a 7% gain for bitcoin and a 9% surge in cryptocurrencies’ market capitalization, leading analysts to speculate that some Chinese investors were selling the yuan and buying digital currencies.

“People worry about not just the yuan but the overall economy in China. We see a lot of internet companies freezing hiring, and they are actually laying off people already because of the trade war,” said Chung, who is based in Hong Kong.

Indeed, there has been a correlation between a weaker yuan and stronger bitcoin during times of lower volatility in crypto markets this year.

Mati Greenspan, an analyst at the eToro exchange, said as the U.S. dollar surpassed 7 yuan the venue saw significant increases in crypto and commodities trading, alongside a moderate drop-off in stocks and fiat currency volumes.

“Crypto assets saw a particularly pronounced spike on the day of the People’s Bank of China’s (yuan) decision: Volumes across all cryptos on eToro’s trading platform doubled from their levels a week prior, both globally and in China and Hong Kong,” he added.

Still, Greenspan could not say whether crypto buying came from Chinese investors.

Chinese investors have stayed active in cryptocurrencies despite the prohibition of exchanges. Most Chinese crypto trading has shifted to OTC venues, as well as WeChat groups since the ban, market participants said.

“We just know that there is a lot of activity, and for regulatory reasons it’s under the radar a bit,” said Garrick Hileman, head of research at digital wallet firm Blockchain.

For individual investors, the motivation to trade crypto is also down to chances to make money via arbitrage between the yuan, the Hong Kong dollar, and Tether – a so-called stablecoin backed by U.S. dollars, market players said.

“A lot of people trying to move capital in and out of borders try to use Tether as a medium,” said Anthony Wong of Hong Kong-based crypto investment firm Orichal Partners.