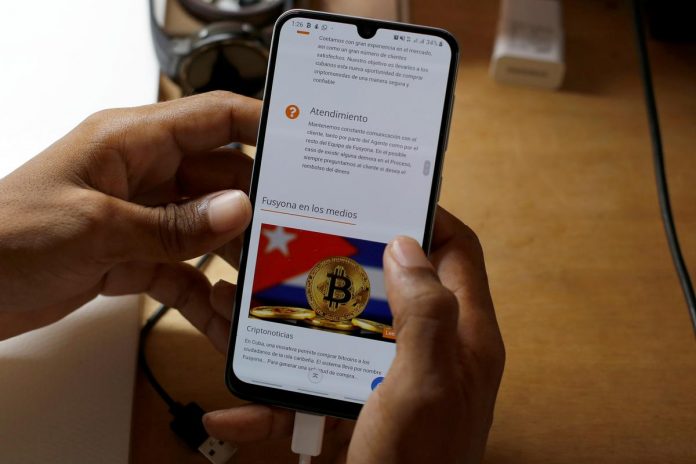 HAVANA (Reuters) – Jason Sanchez, 35, was able to start buying spare parts online last year for his cellphone repair shop in Havana thanks to the advent of cryptocurrency trading in Communist-run Cuba.

Cuba, which in many ways remains stuck in the analogue past, may seem an unlikely hotbed for cryptocurrencies – digital tokens that use encryption techniques to secure transactions.

Yet the roll-out of mobile internet nearly a year ago has opened the way for cryptocurrency transactions, and enthusiasts have multiplied as the currency helps overcome obstacles created by U.S. sanctions on Cuba.

The decades-old U.S. trade embargo cuts Cubans off from conventional international payment systems and financial markets. Cubans cannot obtain credit or debit cards for international use on the island and struggle to do so abroad.

So Cubans like Sanchez are buying digital currencies, which are mostly unregulated, decentralized and anonymous, to make purchases online as well as to invest and trade.

“This is really opening new doors for us,” said Sanchez, who uses Bitcoin, the most well known cryptocurrency, to purchase parts not available new in Cuba from an online Chinese store.

Alex Sobrino, founder of the Telegram channel CubaCripto where Cubans debate and trade digital currencies, said he estimated some 10,000 Cubans were using them.

“We are using cryptocurrencies to top up our cellphones, to make purchases online, and there are even people reserving hotel rooms with (it),” said the 33-year-old, who trades crypto as a side gig to his family’s baking business.

To be sure, it is unlikely the digital coins will become a primary payment method for the Caribbean island’s 11.2 million inhabitants any time soon.

And since Cubans mostly do not have credit cards, many have to ask relatives abroad to purchase them their first installment of cryptocurrency or buy within the community on social media channels like CubaCripto, which has more than 400 members.

Often the two sides of the deal meet face to face for the buyer to hand over cash and the seller to carry out the transaction on a laptop or phone.

Sanchez bought fractions of Bitcoin – which are worth around $10,000 each – through a startup founded a year ago by Cubans in Brazil that aims to make crypto purchases more businesslike.

Fusyona, which bills itself Cuba’s first crypto exchange, uses the hard currency of people abroad who want to send remittances to Cuba to invest in any of nine major cryptocurrencies via a larger exchange.

It then uses the pesos of Cubans who want to invest at least the equivalent of $150 in crypto to pay the remittances. The website, which charges a fee of up to 10 percent, has some 1,300 users to date.

“But for Cubans it is a necessity and can be a solution to their exclusion from the global financial community.”

Several crowdfunding platforms shut down accounts for victims of the tornado in Havana earlier this year, for example, despite donations being legal, simply due to the mention of Cuba.

Foreign platforms are nervous about carrying out even legal transactions regarding Cuba due to past multimillion-dollar U.S. fines on institutions for violating sanctions.

Fusyona however set up its own donations account in Bitcoin that faced no such problems.

The Cuban government said in July it was itself exploring the potential of cryptocurrency, following in the footsteps of other countries under U.S. sanctions like Venezuela and Iran.

During a brief stay on the island, U.S. fugitive, crypto evangelist and founder of McAfee antivirus software John McAfee made headlines saying he would be willing to help Cuba in the endeavor.

However Cuba could, like Iran, choose to develop an experimental national cryptocurrency even while banning trading in existing digital currencies due to concerns about money laundering or a clash with its Communist principles.

“We worry the government will restrict us, prohibit things, start to say this is illicit enrichment,” said Sobrino.

He added that he would welcome government support of the fledgling crypto community and was aware of the need to protect would-be investors from scammers taking advantage of the lack of regulation, as elsewhere in the world.

Leon said he was nervous his agents on the island who receive and transfer cash might be suspected of dodgy financial dealings and has started talks with Central Bank officials about the possibility of getting an official stamp of approval for Fusyona. The business is registered in Brazil.

The Central Bank is exploring the benefits and risks of the digital currency, state-run website Cubadebate said on Tuesday.

Professor Alexi Masso Muoz of Havana University’s cryptography institute was cited as saying there are no laws on the topic currently, “although it is possible it will shortly have some.”

In the meantime, the craze is reaching even Cuba’s eastern regions, far from the cosmopolitan capital.

“I hope in the future cryptocurrency will be par for the course for all Cubans,” said Ruslan Concepcion, 27, who lives in the quiet eastern city of Las Tunas and invests in crypto to earn extra income.