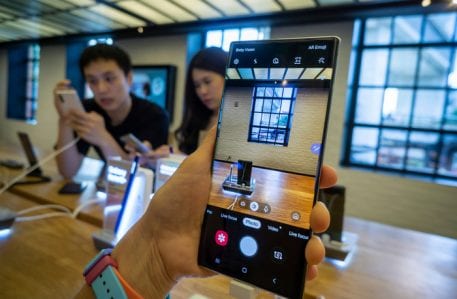 The new product will be marketed as a “KlaytnPhone,” named after a South Korean blockchain platform, sources told the WSJ. Right now, it’s only being sold in South Korea.

The smartphone will have the same hardware and packaging as the recently-released Galaxy Note 10, and prices will start at around $1,000, the sources said.

Buyers will also get some of the new digital currency, called “Klay” coins, and some phones will come installed with blockchain apps and a cryptocurrency wallet.

Samsung is also rolling out the Galaxy Fold in South Korea. The tablet-sized phone folds like a book and will cost about $2,000.

Samsung is partnering with the creator of the Klaytn platform, Ground X Corp.

Blockchain relies on encryption to cloak a range of transaction data, but the technology is largely misunderstood. The technology is considered a potential game-changer during a time of increasing cybersecurity breaches.

“Currently, we are thinking of a private blockchain, though this is not yet confirmed,” a source told CoinDesk Korea. “It could also be a public blockchain in the future, but I think it will be a hybrid — that is, a combination of public and private blockchains.”