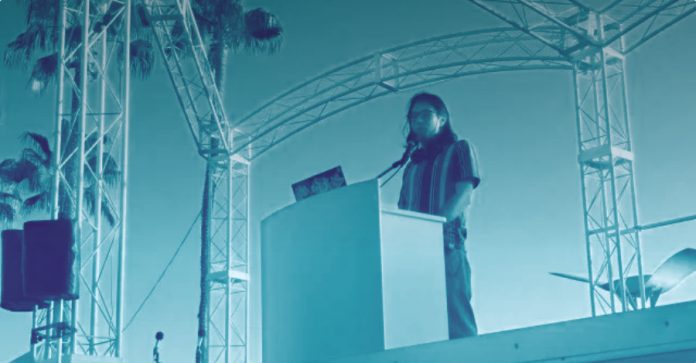 OSAKA, Japan—Ethereum Foundation researcher Vlad Zamfir gave a clear warning at Devcon 5 yesterday: developers need to start thinking about Ethereum’s legal status, rather than simply hoping it will grow so big that governments will have to accept it.

Speaking at the outside amphitheatre, with Osaka Bay behind him, the falling sun reflected in his audience’s eyes, he could have been mistaken for a Grecian orator discoursing on law and politics. But he was here to tackle a tricky crypto question: Is Ethereum—a disruptive blockchain platform leading a decentralized revolution—even legal?

“From smart contracts to unstoppable code, Ethereum is a legal project as much as a tech project. This is possibly controversial but not talked about all that much,” he began.

He briefly dived into the historical context, in order to explain where we currently stand. “Ethereum was born into a counter-cultural movement, a cypherpunk movement,” Zamfir said. “In Ethereum, we went much further than Bitcoin and said we didn’t just want to do this for money, but for everything.”

How smart are smart contracts?

He pointed to one characteristic of the Ethereum blockchain: the notion of smart contracts,  code that automatically results in the movement of money, when the conditions of the contract is fulfilled. To date, we have treated them as legally binding. “Smart contracts are basically an esoteric legal form, marketed and understood as an alternative to legal contracts.”

The problem, he said, is that now we’ve gone down this road, governments may or may not approve. He asked, “How does our anti-legal revolution react with the established legal order?”

Zamfir said that some companies choose to work fully within the regulations, while others push the limit when it comes to complying with the law. And some just up and leave, preferring to work with more favourable conditions in other countries. Alternatively, some hide behind the mask of anonymity, so people can’t stop what they’re doing.

All this impacts upon blockchain development. He added, “A developer who thinks they’re not responsible for what they put on the blockchain and a developer who does, might behave quite differently.”

So far, he claimed, the general consensus has been that blockchains have generally been a form of “private law.” This is where the blockchain-based contract between two people is seen as a private contract between two people, and that it and only it, is important. Very much the cypherpunk view. But this approach brings risks. If blockchain creators continue to act irrespective of the law and governments, they will provoke a reaction.

“We’re not going to be able to continue on our current course, as though nothing needs to change until we have mass adoption, and have this successful global revolution,” he said. “Unless there are extraordinary circumstances, that’s not going to happen. Something’s going to have to give. Whether we’re co-opted, regulated or competed out of existence.”

The Empire Strikes Back

Third, they could make electronic legal systems that can compete with blockchain-based ones. For example, they could create a centralized system that runs electronic contracts, making payments happen automatically. It could be faster and cheaper. And while it might not appeal to decentralization advocates, it might be a more tempting offer to businesses.

“What will the law do with our legal revolution? It certainly won’t do nothing. We’re not going away, and we’re pretty disruptive. It’s inevitably going to come to a head,” he said, adding, “What we’re doing is too radical and revolutionary for the established legal order to ignore.”

Now that he’s opened up this can of worms, it looks like the Ethereum community can’t ignore it either.