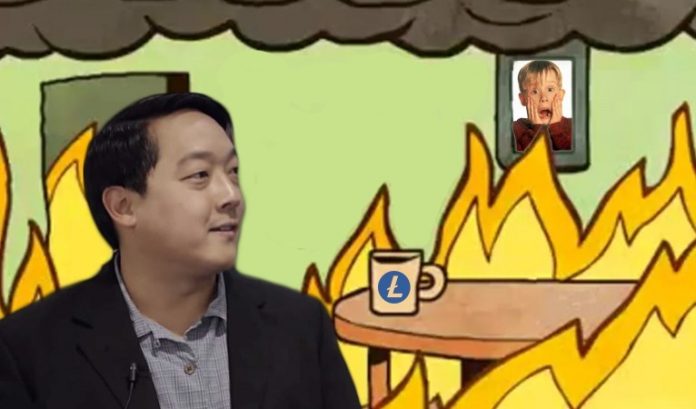 Leaked messages from a Litecoin developer chat show no evidence of active development on privacy features as Litecoin users are hit with a large-scale privacy-compromising attack.

According to messages leaked from a Telegram chat with developers, Franklyn Richards, Director of the Litecoin Foundation, expressed frustration at the lack of any solid development progress on touted upcoming privacy improvements and vague answers from the development team:

“What would happen if I right now told people actually in public Litecoin has zero active development and I haven’t heard anything from the lead developer in months?”

Litecoin founder and lead developer Charlie Lee responded to concerns candidly, noting the distinct lack of interest in the project from developers:

“The honest truth is that no one is interested in working on Litecoin protocol development work. At least no one technically competent. You can’t just throw money at this problem. This is true for Litecoin since the beginning.”

Forked from Bitcoin in 2011, Litecoin has frequently faced criticisms for limited development or innovation outside of mirroring Bitcoin’s advancements, and served as the initial codebase from which Dash was forked in 2014, which was switched to be based off of Bitcoin due to lacking Litecoin development at that time.

Approximately 5 hours ago there was a large-scale dusting attack on $LTC @Litecoin users.

One of many transactions: https://t.co/zgk9gPRNcU

Here’s what you need to know and how to protect yourself:https://t.co/KNVoQLwBUb

This news of lagging development comes as Litecoin users have come under a large-scale dusting attack, a method where very small amounts of the coin are sent to a wide variety of addresses. When these dust transactions are moved together, the attacking entity can draw correlations and discover identities and ownership over funds. Litecoin development on various privacy implementations, including Confidential Transactions (CT), was allegedly begun, but according to Richards progress has not met expectations:

“I was extremely disappointed to discover that no progress had been made on CT since the announcement, especially when I stand on stage telling everyone it’s happening and we are actively working on it.”

Richards further expressed frustration with limited progress and communication regarding development especially when contrasted with promises of eventual deliverables and, most importantly, requests for donations:

“I am a director of the Foundation if I don’t see it then something is wrong. I have a private chat where I have asked for dev updates numerous time and have zero response. You sit in on these talks that are hidden from me? It’s a moral dilemma. We cannot ask for money yet privately say there’s no dev to pay with it, Charlie can’t also say we will have CT in 2019 and then say he doesn’t care when people ask for updates or expect some progress to have been made.”

Lack of self-funding may lead to poor development, centralization

Litecoin’s recent development issues may be traced to a lack of a proper decentralized funding mechanism. With Dash, 10% of the new coins created every month is available to fund a variety of projects, including development, directed in a fully decentralized fashion by a vote by masternodes, specialized nodes which must prove control over 1,000 units of Dash in order to run. In addition to the possibility of losing funding at any given month, Dash Core Group, the main development arm of Dash, is further held accountable due to being completely owned by the Dash DAO Irrevocable Trust (or Dash Trust), a legal entity controlled by the Dash network. Because of this structure, Dash holders are able to not only make the binary decision of whether or not to fund the Core developer team, but can make more granular decisions such as removing certain leadership members or ordering the transfer of property, including the main website or control over the code repositories, to a new team.

In a system without such a structure, development is handled on a volunteer basis, or through donations and some form of a nonprofit foundation. In some cases, such as with Litecoin, a decentralized project may become relatively centralized around its founders’ ability to carry on their work and potentially self-fund development, as Lee alluded to in an ominous statement:

“When there’s update, I will post an update. Sorry, but I don’t very much care if people are disappointed if they expect a lot of progress. People need to stop looking to me to make everything happen. It’s a decentralized currency after all, right? Or is it?”