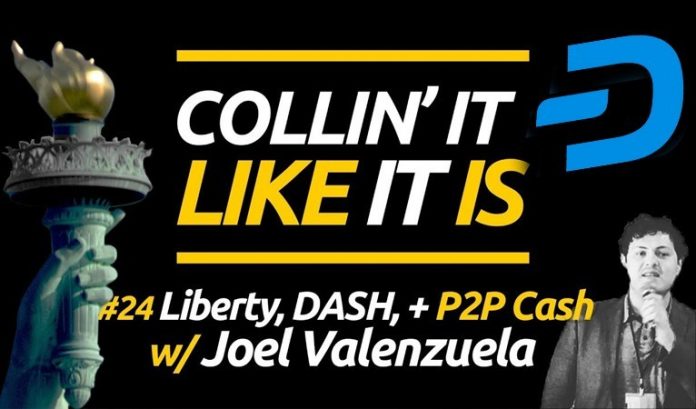 I had the unique pleasure of appearing on Collin’ It Like It Is, a live cryptocurrency show by Collin Enstad. We started off the discussion right away with addressing some comments that popped up on Twitter from trolls when my appearance was announced, namely Dash’s launch and initial distribution. We waded through “FUD-busting” territory for most of the first part, comparing Dash’s launch and distribution with those of other popular coins, and comparing merchant numbers, particularly in Venezuela, and addressing the accuracy of various business listings around the space. We then navigated to liberty and libertarianism, including my move to New Hampshire for the Free State Project. This included covering my move in late 2015 to live entirely off of cryptocurrency, including the failure to live off of Bitcoin after scaling issues kicked in, and a switch to Dash. We also compared Dash and Bitcoin Cash, the two top contenders for the now-vacant title of peer-to-peer electronic cash, including different consensus mechanisms and approaches to fighting off 51% attacks in the form of ChainLocks for Dash and Avalanche and others for Bitcoin Cash.

Can Bitcoin really be a store of value, or is it still tied to utility?

We wrapped up by discussing Bitcoin, the original cryptocurrency, and its decline in usefulness as a payments system, including the store-of-value proposition. We went over how essentially anything can be used to store value, and that this prospect always hinges on actual utility. I drove the point home by outlining all the ways Bitcoin still provides real-world utility, which remains the source of its high valuation today, not a vague concept of storing value effectively absent utility, and how currencies like Dash and Bitcoin Cash potentially catching up in terms of adoption could challenge the store-of-value reality.

The full interview is embedded above, happy watching!.