Horizon Blockchain Games has raised $3.75 million in seed funding and it has unveiled its debut blockchain game, SkyWeaver, which offers true ownership of digital cards.

The Toronto-based game company is treading in a familiar area for blockchain game companies, such as CryptoKitties, in using blockchain — the transparent and secure decentralized ledger technology — to create one-of-a-kind, verifiable collectibles in digital form for gamers.

But in an interview with GamesBeat, CEO Peter Kieltyka said that the company has focused on creating a high-quality, Hearthstone style online trading card game on iOS, Android, Mac, Linux, and Windows. It will debut in the fourth quarter of 2019. 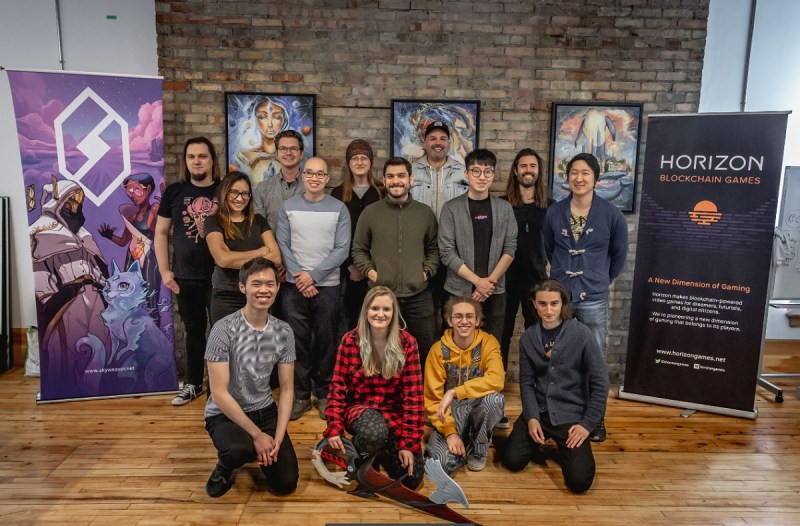 Since players can own the digital cards, they are free to buy, sell, and trade them in open markets via the Ethereum blockchain-based cryptocurrency network.

Horizon has also created a full digital wallet, Arcadeum, that makes it easy for players to buy and sell items with cryptocurrency. Arcadeum is built on the Ethereum network and will provide players with secure wallets to store their SkyWeaver assets in addition to assets from other blockchain games. Arcadeum also serves as a browser for players to enter the new Web and discover all Ethereum-based applications.

The company has built an online game, SkyWeaver, now in private testing, to bring truth to its vision and demonstrate its new platform. SkyWeaver combines popular trading card game features with accessible design and freedom for players to own their cards.

“As I watched CryptoKitties take off, I thought this is what we could do, make a collectible card game that was a lot deeper,” said Kieltyka. “The blockchain makes digital things tangible, where you can own it and trade it. We really think of this as the next dimension in games.”

Kieltyka had the idea to start a blockchain game company, after his previous company was sold. He saw CryptoKitties taking off, and he thought that a good candidate for blockchain would be a collectible card game like Magic: The Gathering. He recruited game designers such as Jonathon Loucks, who worked on Magic’s online game, and others to build the company.

“Peter and the Horizon team have impressed me as a company with great passion to make blockchain meaningful for games,” said Initialized Capital managing partner Ohanian, in a statement. “We are proud to have invested because not only do they have a long term future vision with a desire to make a positive impact on society, they are a far-seeing video games company, making engaging experiences that will give players all the benefits of digital and physical worlds colliding.”

SkyWeaver allows players to win cards by competing and ascending the ranks of its worldwide leaderboard. Players can then play with, trade, give away, or sell their cards on the Ethereum network for real-world value.

SkyWeaver will allow cross-platform play and will launch with more than 300 cards and offer players unique playstyle classes to choose from called Prisms.

Horizon will release the Arcadeum wallet under an open-source license to enable game developers to turn their in-game items into crypto collectibles.

“Gamers are spending $30 billion a year on virtual items, and now we offer them a chance to own these goods,” Kieltyka said. “Some of these digital currencies are ecosystems. Some items are priced very low, but some also become very valuable and rare.”

SkyWeaver takes place in “Sky,” a new digital dimension that exists parallel to Earth. Players a.k.a. SkyWeavers harness Sky’s eight environmental elements to win the allegiance of ethereal creatures on their quest to become the most legendary SkyWeaver in this new digital dimension. By ascending the worldwide leaderboard as part of a global competition, SkyWeavers win new cards that become their property, Loucks said.

“Our mana is uncapped, and you can do things like a 16-mana spell, which is huge,” Loucks said. “Yet anyone familiar with the card game genre can jump in and start playing.”

SkyWeaver is an HTML5 game that innovates on the genre by creating cards that are blockchain assets, which are truly owned by the players, rather than being representational data on a centralized server. In SkyWeaver, players win, trade, buy and sell cards on the Ethereum blockchain network, made accessible by Horizon’s easy and intuitive wallet and digital arcade, Arcadeum.

You can play the game on a browser, and it will be easy to see where you stand on leaderboards. The game has no loot boxes. The cards will initially cost about a dollar each. Silver cards are awarded to those who are in the top 100 on the leaderboard. The rare cards are gold edition cards that you can win through gameplay tournaments, which will be available after launch.

“We wanted to make a game like Hearthstone feel deeper,” Kieltyka said. “More advanced. Deeper strategies. While Magic games might take 45 minutes, our intention is to build something in the middle, to deepen it and make it skill-based. Matches can take around 10 minutes.”

Arcadeum verifies players’ asset ownership and allows them to securely store and manage their cards. Horizon has 21 people.