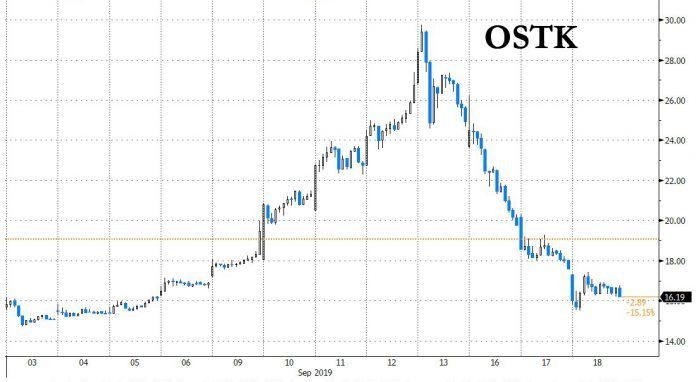 After falling out of favor with shareholders over his company’s poor stock performance, comments about the “deep state” and his alleged relationship with Russian honeypot Marina Butina, Overstock CEO Patrick Byrne announced his resignation weeks ago.

And now, it looks like Byrne has finally checked out completely: on Wednesday after hours, he filed a Form 4 showing that he had sold his entire ~$90 million stake in the company into the stock’s recent squeeze as lending desks struggled to figure out how to handle the company’s recently proposed “digital dividend”.

His Form 4 showed that he sold about 4.8 million shares over the course of the past three trading sessions. His remaining 87,000 shares were given as a gift to an undisclosed recipient.

Then, in a blog post on his site Deep Capture, Byrne blamed the SEC, who he called “the Deep State’s pets”, according to MarketWatch. 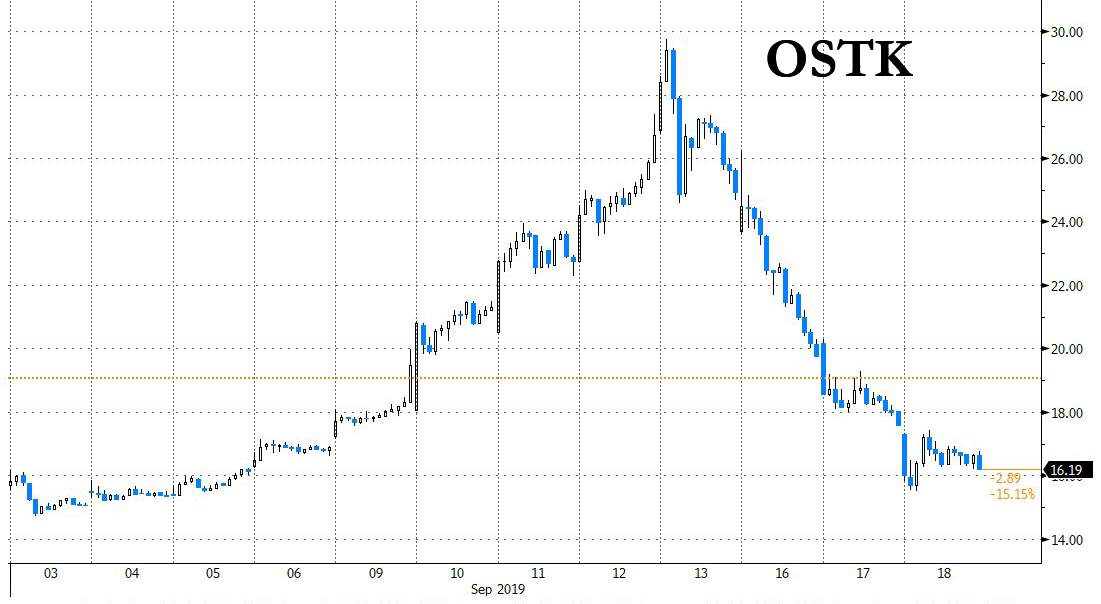 The “digital dividend” that Byrne left in his wake to his shareholders could only be accessed through Overstock’s blockchain based exchange and required the holder to retain the asset for 6 months. Many thought it was an attempt to squeeze shorts and, if it was, it worked. Overstock stock shot from about $15 on September 4 to a high of almost $30 on September 13 as shorts covered in an attempt to avoid having to deal with the dividend.

But on Wednesday, Overstock had to walk back some of their plans, announcing that the dividend would be freely tradable upon its issue. The company suggested that the change was a reaction to “feedback we received from industry participants, investors and regulators.” The company also moved back the date of the distribution and promised to announce a new record date in 3 to 6 weeks.

On his blog, Byrne said that the pressure to change the digital dividend came from the “Deep State’s pets”:

“We heard over the weekend that starting last Friday, the Deep State’s pets at the SEC began leaking something to their clients JPMorgan, Morgan Stanley, and Goldman (and here as citizens I bet you thought we were their clients, right? lol). They leaked that they were going to Bazoomba our digital dividend. Once that started getting back to me, I realized this: Whenever I have had any question about whether the SEC would or would not do something totally outrageous in order to hurt our company to benefit their clients on Wall Street, they never let me down: they always did the evil thing.” 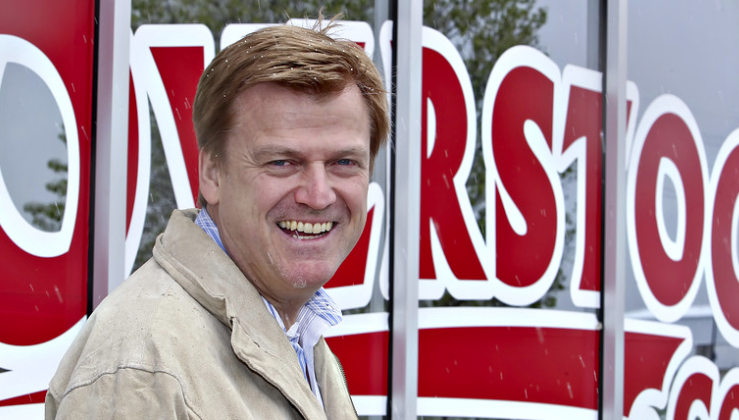 Byrne said the assertion that he sold his shares due to lack of confidence in the company was “wrong” and said he would be using his newfound riches to invest in gold, silver and two unnamed cryptocurrencies as a “hedge” against the economy failing. He also promised that if Overstock failed due to the broader economy failing, that he would use his gains from his hedges to recapitalize the company.

“…after paying tens of millions in taxes (after all, “We didn’t build that,” right?) by Friday the rest will be in investments that are counter-cyclical to the economy: Gold, silver, and two flavors of crypto. The gold and silver are stored outside of the United States, in Switzerland, and within two weeks, will be scattered in other locations that are even more outside of the reach of the Deep State, but are places that are safe for me.

The crypto is stored in the place where all crypto is stored: in mathematical mist, behind long keys held only in the memory of someone who is quite good at storing such things in memory (with paper backups in the hands of a priest I met 35 years ago who never sits foot in the West). “

”You will have not just access to capital, you will have access to the friendliest capital imaginable: my own. I have to wait six months for it to be legal, but anytime after March 17, 2020 I can provide a capital injection if needed by buying back into Overstock. Please remember that as you watch the global chaos.”

Meanwhile, the SEC has had an ongoing investigation into Overstock’s tZero blockchain subsidiary and its token security offering since February 2018. Overstock disclosed in May that the SEC had expanded its investigation to include certain public statements made by the company.