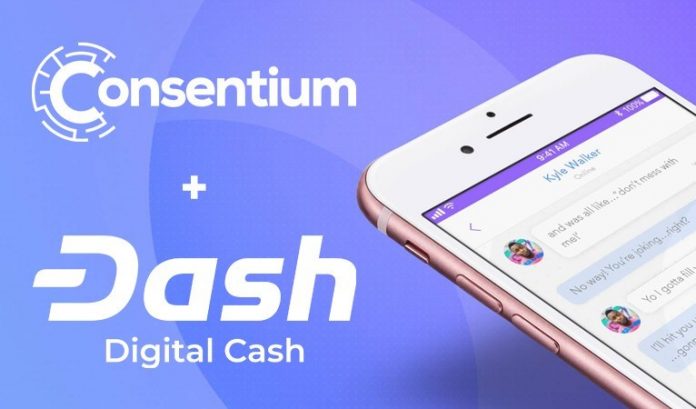 Dash Thailand announced a new partnership with Consentium, which provides a socializing and messaging platform where individuals can transfer cryptocurrencies between each other and rewards community organizers with cryptocurrency.

Consentium’s website says their “chat feature allows users to regularly communicate with each other, create groups, join channels, send photos, files, audio messages, and even crypto transfers”. They also enable “[t]exts and recorded audios [to] be sent as normal messages or be set to self-destruct within seconds, allowing for enhanced privacy settings”. The platform’s Chat Community Monetization (CCM) Model charges a 1% fee on all transactions on their platform, split evenly between sender and receiver, which is deposited to a redistribution pool and then allocated to chat and community organizers.

“[T]he biggest use of Consentium, on top of chat, is on day to day transaction such as paying for coffee, groceries, splitting your uber bill with a friend. Dash, in its ability to transact at lightning speed and low fees is a necessary product offering in our ecosystem in other to fulfill this mission”.

Consentium discussed their reasoning for wanting to integrate Dash to expand consumers’ usability of the platform. They currently support Bitcoin, Ethereum, and their own CSM coin. Dash will be fully integrated on Consentium by November 1st, but is currently available for trading on their partner exchange, Exonium.

Cryptocurrency carries a lot inherent benefits for individuals in nations that lack banking access or individuals that crave sound and private money. However, for many consumers that care little about the technical aspects of cryptocurrency, they may not be able to see the advantages over traditional debit/credit cards. Thus, there has to be additional incentives to motivate these consumers to adopt cryptocurrency. Consentium attempts to fill this gap by “creating the necessary architecture to support communities” rather than just another wallet.

“Communities all around the world are hosting their groups on whatsapp, telegram, slack and the likes without being rewarded in any way and transactions are happening on external wallets right now.”

Additionally, Consentium plans to increase the number of merchants accepting cryptocurrency and Dash. They plan to catalyze this by introducing “a series of stablecoins into [their] ecosystem”, which “should allow any merchant who wants to accept Dash but want[s] to avoid risks of volatility to transact and hedge freely within [the] app”. Consentium already has “merchants adopting Consentium tokens in both retail and f&B stores in China” and are “the official currency for Huobi Singapore’s end of year event in 2018”.

Great News! As part of #Dash #Thailands new project Dash #Next which is focusing on Dash growth in Asia and beyond, Dash has been listed at #Lex #Exchange. Please visit https to learn more: https://t.co/GKTrlOUgf2@Dashpay @DashpayNews @dashcrypto @DashTravelworld @DashSYD pic.twitter.com/P6ZoRkV2Tz

Dash Thailand has recognized the need to build communities as being key to increasing adoption and has thus been focusing on hosting Dash events and on-boarding merchants in Thailand that cater to travelers. They also just launched Dash Next to focus on growing Dash in Asia and beyond. This then helps advocate for Dash by showing potential users the fun and excitement around using digital cash that confirms in seconds for less than a penny fee and can be instantly respent.

Dash, as a wider network, also recognizes the importance of building communities around usage and thus many groups within the Dash community have remained committed to keeping the community informed such as regular Dash Core Group updates, Dash Watch reporting progress of projects, Dash Discord channels, and Dash News informing the community of regular news. The Dash is also planning to further enhance its developer community, and thus, features for users with the launch of its DAPI and Dash Drive features in the future.