Dash has reached another all-time high in mining hashrate and now ranks as one of the most decentralized cryptocurrencies.

Last month, the Dash network reached a new all-time high in hashrate of 3.2385 petahashes, defeating the previous record at the beginning of the month of 3.126 petahashes. Now, according to data from BitInfoCharts, Dash mining has once again reached a new high, reaching 3.327 petahashes on the last day of April, and presently at another new high of 3.362 petahashes. This represents a continuing increase in Dash’s network security, a factor that may be at risk during long-term price slumps, and may indicate belief in the long-term viability of Dash, either through mining at a loss in anticipation of future higher price, or through developing improved mining hardware able to mine with greater efficiency.

In addition to a newer all-time high in hashrate, Dash has also achieved improvements in mining decentralization. According to information from CryptoID, no single mining entity controls more than 23% of the hashrate, and the top two together control 44%. This also puts Dash in the top most decentralized coins as far as number of entities controlling the majority of hashrate or voting power.

Dash is one of the top most decentralized coins in supply distribution, node count, and governance, on- and off-chain

These improvements to hashrate and mining distribution advance Dash’s position as one of the top most decentralized cryptocurrencies by a wide variety of metrics. 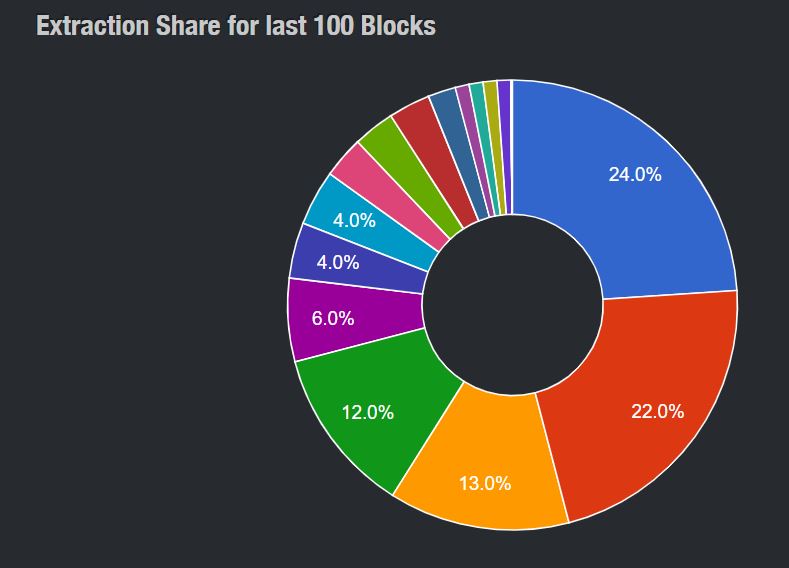 Website Are We Decentralized Yet? tracks a variety of metrics relative to the decentralization of the top cryptocurrency projects. According to data curated on the site, Dash ranks as one of the top most decentralized projects by nearly all metrics. In terms of number of entities in control of over 50% of the network mining or voting power, Dash ranked in the top, in a three-way tie with Ethereum and Decred for third place with three entities (the quoted metrics for Dash state two entities, drawing on data nearly two months old), behind Dogecoin, Litecoin, Bitcoin, and Bitcoin Cash tied for second place with four, and DigiByte at first with ten. Dash also ranked in the top three for highest number of nodes behind only Bitcoin and Ethereum, and representing more nodes than the four coins below (Bitcoin Cash, Monero, Ripple, and Bitcoin SV) combined. Finally, Dash ranked as the very best in known decentralization of coin supply with just 15% in the top 100 accounts, ahead of Bitcoin and Tezos. Of these three key metrics, only Bitcoin and Dash remained in the top three rankings for all three categories. Improvements in mining decentralization would put Dash in a statistical dead heat with Bitcoin, tied for mining power and ahead in distribution while behind in node count.

In addition to the more broadly-applicable network metrics, Dash also ranks higher than other cryptocurrency projects in decentralization of governance. Unlike other coins, Dash’s developers are funded and controlled by a protocol-level network vote, meaning that masternodes (representing investors in the network with no barrier other than Dash ownership) have the power to defund the development team as well as symbolically indicate their lack of support by the network and community. However, in addition to this, the Dash Core team, as well as associated assests, is legally owned by the Dash DAO Irrevocable Trust, a legal entity controlled by the anonymous group of masternode operators. This means that the Dash Trust can legally compel the Core team to relinquish assets such as GitHub repository commit access, ownership over websites and domains, and others. This gives an advantage over coins such as Bitcoin which may be controlled by a single development team with outside funding, with sole and permanent control over assets such as the Bitcoin.org website or the main GitHub repositories.

In addition to the current new levels of decentralization and security achieved by Dash, the upcoming version 0.14 plans to roll out ChainLocks, an anti-51% attack-proofing measure which would use the masternode network to lock-in blocks with the first-seen rule, preventing malicious mining attacks, including a majority hashrate attack. This promises to drastically increase Dash’s security, requiring a potential attacker to control the majority of both the masternode network and the mining hashpower in order to exert control.

With the addition of ChainLocks, Dash’s present tied-for-third place of most major mining actors of three entities could potentially be increased by thousands, easily claiming the top Are We Decentralized? spot for the category. Additionally, according to Crypto51, the most expensive cryptocurrency to attack is Bitcoin, at a rough estimate of $513,008 for the cost of a one-hour attack on the network. With ChainLocks, Dash’s price for such an attack would skyrocket into the hundreds of millions, possibly higher depending on resulting market prices and liquidity barriers. This could make Dash both the most decentralized and the most secure cryptocurrency network in existence.