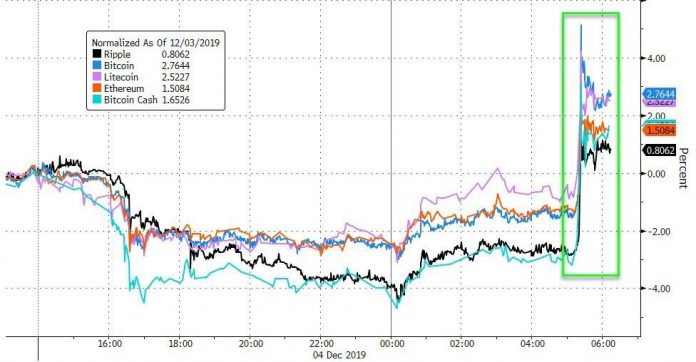 Catalysts, as usual, are unclear but a sudden surge of buying has lifted cryptos across the board this morning…

In futures markets, open interest is the number of open contracts in the market and is often used to indicate the health of the market. When there is a large amount of open interest, new or additional capital is flowing in.

The reported open interest is a 42% increase from the previous day, which was an all-time high as well. Last Friday and Saturday saw open interest records of $4.2 million and $4.3  million, respectively.

The platform’s trading volumes have been continuously breaking records since its launch in September. At the end of November, daily volumes on the platform hit a new all-time high of over $42.5 million — or 4,443 BTC at the time.

Also in November, Bakkt’s chief operating officer Adam White announced the firm’s move to include a cash-settled option in an apparent bid to further increase the platform’s popularity among investors. The Intercontinental Exchange — Bakkt’s parent company — later confirmed the launch of the option for Dec. 9.