What goes up, must go down… what does down, must go up…?

After a big and bloody plunge this week — which saw the price of bitcoin touch a two-month low of sub-$6,000 — the crypto market has mounted a comeback with double-digit gains across the board.

Coinmarketcap.com — the current go-to for crypto pricing — shows that bitcoin is up 26 percent in the last 24 hours to $8,200 following that bloodbath. Of the remaining top five: Ethereum is up 32 percent over the same period, Ripple and Bitcoin Cash both rose by 22 percent, and Cardano is up 25 percent.

Of the top 10 most valuable cryptocurrencies, all have seen gains of at least 20 percent with NEO, in particular, clocking an increase of more than 55 percent. The gains continue right down the tail, with Coinmarketcap.com’s top 100 most-valued cryptocurrencies all posting increases over the last 24 hours.

The total market cap of all cryptocurrencies is estimated at over $390 billion, with bitcoin representing 35 percent of that figure.

That marks a recovery, but the total market cap is still some way down from where it has been lately. We reported that it was at $459 billion last week, having been as high as $830 billion in early January. 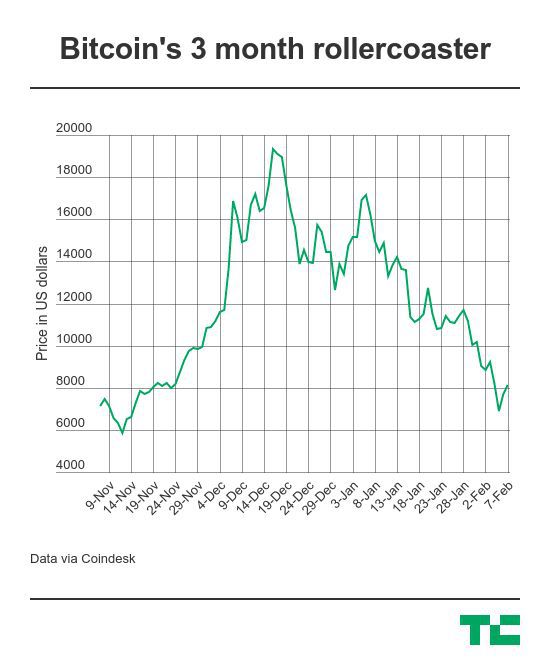 That’s the what, so what about the why?

Well, nobody knows for sure when it comes to the pricing highs and lows of bitcoin or other cryptocurrencies, but the past week has certainly been eventful in terms of news and signals.

Just yesterday, a U.S. Senate cryptocurrency hearing struck an unexpectedly optimistic tone on the current state of play. While SEC Chairman Jay Clayton and Commodity Futures Trading Commission Chairman Christopher Giancarlo voiced concern over a lack of regulation and potential security violations, the focus seemed to be on removing unsavory factors rather than killing crypto altogether.

The run-in to the hearing, however, had seen concern after a number of banks and credit card agencies made it harder for consumers to buy bitcoin and cryptocurrencies.

“The government does not recognize cryptocurrency as legal tender or coin and will take all measures to eliminate the use of these crypto-assets in financing illegitimate activities or as part of the payment system,” Jaitley said during a budget speech in which he also expressed interest in blockchain technology.

While his comments focused on illegitimate activity, reports suggesting the statement signaled a broader cryptocurrency ban seemed off-base since all overseas currencies, such as the U.S. dollar, are also not recognized as legal tender in India. Bitcoin is simply another addition to that list, based on the minister’s comments.

Then, in a further update in South Korea — a well-known crypto buying hub — a new ‘know your customer’ rule went into effect to mandate the use of real names for cryptocurrency trading. Despite previous reports and comment from some members of the government, Korean authorities have indicated that they plan to regulate rather than outlaw bitcoin and other crypto.

How does all this fit back into today’s price jump?

The U.S. Senate hearing and seeming progress in Korea and India may indicate potential levels of acceptance and regulated existence for crypto in the future.

Disclosure: The author owns a small amount of bitcoin and Ethereum.