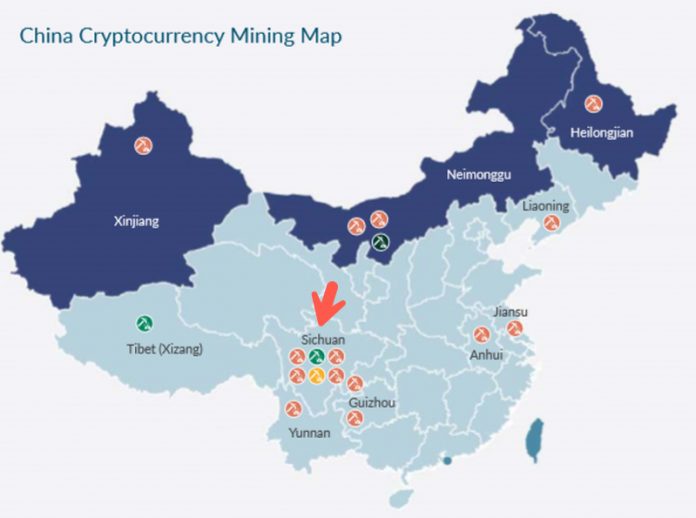 China has been raiding Bitcoin miners who’ve been illegally using electricity — presents a significant danger since so much of the world’s hash rate is concentrated in one country, reported Asia Times.

A recent interview with Ethan Pierse, director of the CryptoAssets Institute, said a recent government crackdown on mining facilities was due to miners illegally using electricity. By law, miners have to register with the government to use large amounts of power. Since electricity is so cheap, miners from around the world have flocked to China.

Pierse said, “People are going around that even still and tapping into electricity where they can and siphoning that off. So basically, they see that and monitor that there are weird peaks of electricity usage in places, and they go and track it down. One miner’s using the same electricity as a single household or dozens of households.”

Pierse said 65% of the world’s hash rate is produced in China. He said the Siachen region is responsible for 50% of that.

If any network disruption occurred in China, it would be very problematic for the global Bitcoin network.

Pierse said, “If you’re basing your economy or if you’re trying any kind of monetary policy to anything, whether it’s bitcoin or eventually other things, and the mining of that particular cryptocurrency is controlled this much by another government, more or less their ability to shut that down in and of itself can cause severe economic problems for governments or large corporations or other platforms that are leveraging this.”

In June, China’s Bitcoin miners controlled 60% of the global hash rate, and now the figure is up to 65% in December.

Chris Bendkisen, head of research at CoinShares, believes the rapid increase in the Chinese share of hash rate could be due to the deployment of advanced mining technology and cheap electricity.

“This is beneficial to the Chinese mining industry,” said Bendiksen. “If you are the first to increase your proportion of the hash rate, and you can do that before your competitors, that’s generally good.”

Mining crypto has become more difficult over the last several years as profitability sags. The overall Bitcoin hash rate has risen 80% since June, which in recent times, has created stronger profitability for miners who have access to cheap electricity.

With China controlling more and more of the world’s Bitcoin hash rate, some worry that the US could be falling behind the crypto curve, as Beijing is making a state effort to be a leader in blockchain.

Other top mining hubs are in the US, Russia, and Kazakhstan.

China could be laying the groundwork for a state-backed digital currency in the mid-2020s as it wants to become a leader in crypto in the intermediate timeframe.

The danger at play is that there’s too much hash rate concentrated in China and could lead to global network issues if disruptions in the country were seen.