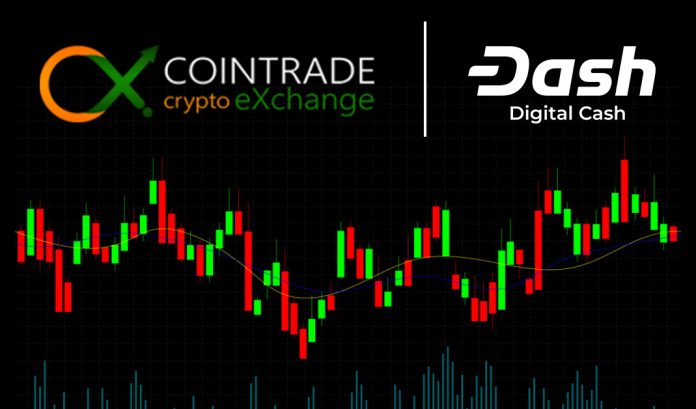 Cointrade.cx, a Brazilian cryptocurrency exchange, has recently added Dash, including explicit InstantSend support, enabling users to deposit on to the platform instantly with Dash.

The rapidly growing Brazilian exchange has recently added Dash support to the platform. This includes fiat trading pairs with Brazilian real (BRL) as well as with fiat stablecoins TrueUSD (TUSD) and Tether (USDT), in addition to Bitcoin (BTC). Notably, Cointrade.cx explicitly supports Dash’s InstantSend technology. This enables users to instantly deposit on to the platform, as well as withdraw, significantly cutting down on time required to access the exchange and enabling additional arbitrage opportunities for traders seeking to trade across other exchanges and capitalize on price discrepancies.

The growing Brazilian and Latin American market for Dash

The addition of Dash to Cointrade.cx further grows the currency’s presence in the Brazilian market. Recently, NovaDAX, another Brazilian exchange with fiat trading pairs, integrated Dash. This came soon after the addition of Dash to Kamoney, a platform allowing users to pay bills with Dash as well as buy gift cards and other services facilitating the usage of Dash as a real everyday money in the country.

Dash additionally claims a strong presence in nearby Latin American countries, leveraging region-wide network effects for additional growth. Hundreds of merchants accept Dash in Colombia thanks to the efforts of regional teams such as Dash Latam, as well as online game faucet Dash.Red which focuses on the Spanish-speaking region, including driving new users to purchase items at local merchants with their newly-acquired Dash. Venezuela notably acquired thousands of Dash-accepting merchants during 2018, and presently counts several major retailers and chains such as Traki, Farmarato, and Farmarket accepting it as payment, as well as a shopping mall and parking structure receiving heavy use in the west of the country.

The addition of Cointrade.cx with InstantSend recognition joins with a presently significant collection of exchanges and brokers recognizing the technology. To date, nearly 20 of such services are listed on the full list of exchanges on Dash’s official website. This includes major exchanges such as Kraken and Digifinex, along 16 others presently, with new options added regularly.

Additionally, some exchanges that do not yet explicitly support InstantSend nonetheless recognize Dash deposits much faster than those of other competing cryptocurrencies. Gold-to-cryptocurrency trading platform Vaultoro, which recently integrated Dash, accepts deposits after a single confirmation, while major cryptocurrency broker Coinbase and its partner exchange Coinbase Pro accept Dash after two confirmations. This is likely due to ChainLocks, which renders the Dash blockchain irreversible after a single confirmation, with Coinbase likely requiring an additional confrimation for extra caution while testing the functionality. As a result, both platforms accept Dash deposits after 2.5-5 minutes, significantly faster than other similar cryptocurrencies.