Blockchain will fuel next oil boom – here’s why 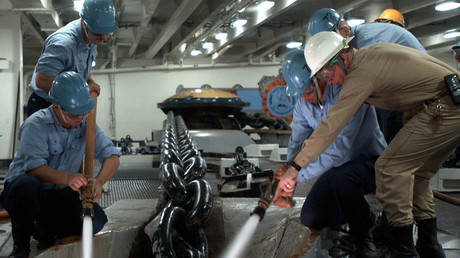 Big Oil is due for a disruption. The world’s most important industry has been carrying on without any significant changes in its day to day routine for far too long.

But now, the new tech on the block has its sights set on the multi-trillion-dollar oil and gas sector. It’s official: Blockchain technology has infiltrated Big Oil.

The hype behind blockchain has reached a full-blown frenzy. And for good reason.The technology, which creates secure ledgers for digital transactions and rapidly accelerates the pace at which transactions can be made, has the potential to disrupt every major industry: real estate, shipping, banking and healthcare.

Blockchain is truly revolutionary, and Big Oil is finally catching on. In an industry that has used technology to reduce breakeven costs to all-time lows, create gigantic drilling rigs run by robots, and even tap reserves located 10 miles below the sea, the oil and gas sector has been slow to jump on the blockchain bandwagon…until now.

According to a report from the World Economic Forum from 2017, a digital transformation has already swept across the energy industry. Now, blockchain is taking it one step further.

Majors like BP and Shell are making headlines with plans to utilize blockchain tech to completely transform how energy is bought and sold. Smaller players with big ambitions like Canada’s Petroteq are preparing to revolutionize the day to day operations of potentially every oil operation on the planet. Petroteq could utilize new technologies to tap massive new reserves of energy, such as the Utah oil sands, while radically reducing environmental risk.

With US President Donald Trump planning a trillion dollar infrastructure program, the possibilities for upgrading American oil and gas systems throughout the country are immense. Integrating blockchain into supply-line management and logistics could dramatically cut costs.

The oil majors are waking up to blockchain possibilities. BP began experimenting with blockchain technology in 2017. David Eyton, BP’s head of technology, noted: “There are uses for blockchain that could give us a competitive advantage.”

And in November, BP joined a blockchain consortium with fellow industry heavyweights Shell and Statoil, in addition to commodity trading houses – Gunvor, Koch Supply & Trading, and Mercuria, with the financial backing of Dutch ABN Amro, ING, and French Societe Generale.

Patrick Arnaud, Managing Director for Trade & Commodity Finance, ING, said: “The commodity finance industry is hampered by nature by inefficiencies and outdated procedures. By applying blockchain technology, we expect that we can eliminate a lot of these, making the overall process faster and more cost effective.”

Royal Dutch/Shell is taking it a step further, investing in a minority stake in the distributed ledger startup Applied Blockchain. The blockchain firm has created platforms across a range of sectors including telecom, manufacturing, and more.’

While the supermajors are focused on trading, others are looking to the tech for far more creative endeavors.

Petroteq , a company that made waves in the sector with its revolutionary patented oil sands tech, has set out on a mission to completely overhaul the industry’s inefficient and error prone supply chain management protocols. Petroteq was recently cited by Geoffrey Cann, a Director at Deloitte specializing in the oil and gas industry, as a contender for blockchain technologies in the energy arena.

Oil and gas is a global endeavor in which huge inventories are held, ordered, transported, and distributed through multiple channels all over the globe. When things go wrong, productivity is slowed, production levels fall, and cargo is lost. This means billions in profit is potentially taken off the table. And with the development of new energy sources such as shale gas, tight oil, oil sands, and coal seam gas reaching a critical mass, it’s more important now than ever to rethink traditional supply chains.

This is the path on which Petroteq has embarked. And with the help of blockchain technology, the company is positioning itself as a leader in this race. Petrobloq, Petroteq’s very own blockchain consortium, is looking to reshape the industry. From drilling, to a finished petroleum-based product and everywhere in between, Petrobloq aims to track, monitor, and account for every drop of petroleum on a transparent, immutable, and secure blockchain.

The first member of the Petrobloq consortium is Latin America’s second largest energy company, PEMEX, which made headlines as the first petroleum company to allow cryptocurrency as a payment option in participating gas stations. In joining the consortium, the company looks to soar to new heights.

Utilizing Petroteq’s technology, Mexico’s national oil company will become one of the world’s largest non-publicly traded companies to introduce a blockchain-based supply chain management platform. An endeavor which is set to bring PEMEX’s processes from production to sale to an entirely new level, ushering in a new era of efficiency and profitability.

These heavy hitting partnerships will certainly disrupt the entire industry. Data will be shared seamlessly between joint ventures. The time it takes to cut a deal will be reduced significantly. And perhaps most importantly, the middle man essentially disappears, reducing costs for every sub-section of the industry.

The dramatic improvements planned for US infrastructure will incorporate innovations from companies like Petroteq. President Trump announced a $1.5 trillion infrastructure plan at the State of the Union Address in January. That means billions will be invested into dilapidated oil and gas infrastructure.

The Trump Administration has made energy dominance a high priority. The Utah oil sands will play a huge part in advancing the future of American energy. And Petroteq has technology to unlock the full potential of the Utah fields and their 32 billion barrels of oil.

And unlike the dirty, expensive tar sands of Canada, Petroteq will be able to exploit the Utah oil sands in an environmentally-friendly, cost-effective way through their proprietary technology. Once the fields of Utah are on-line, US imports of oil from overseas, which are already in decline, could end altogether. The importance of Utah oil sands will push demand for it up and up, making it some of the most valuable oil on the market.

With its mastery of blockchain, Petroteq will be at the head of the pack. But its innovative drive forward is sure to be matched by other companies in the oil and gas sector.

In such a globally connected economy, the impact of transitioning to blockchain tech will be profound and will likely turn any industry on its head. From oil majors like BP and Shell, to smaller innovators like Petroteq, massive potential is set to be unlocked in the oil and gas industry through the innovative use of new technology.

Oil and gas companies using tech to change the industry:

British Petroleum is a multi-national oil and gas supermajor, and the sixth largest energy company on the planet. The company is over 100 years old and is not afraid of reinventing the wheel. And that’s exactly what they’re doing.

As blockchain forced its way into nearly every industry, BP took note. In October 2017, BP begun experimenting with a blockchain-based oil trading platform, with the goal of implementing “practical and ethical” uses of the technology.

With BP’s forward-thinking mindset and vast amount of resources and assets, the company is always looking to learn about and adopt new technology.

Royal Dutch Shell is household name. As one of the largest energy companies on the planet, Shell knows the industry through and through. Shell also has its eyes on the blockchain industry. The company is no stranger to technology, and sees blockchain’s clear benefits, and looks to become an early adopter within the industry.

With BP, Shell is leading a blockchain movement within the industry that is set to revolutionize the way oil and gas is bought and sold. Their platform is set to be launched by the end of 2018, and investors are clearly on the edge of their seats in anticipation.

Pengrowth Energy: Another company that looks to have halted its falling stock price and is now preparing to ride the bullish sentiment in oil markets. Having shed a lot of excess weight this year in massive asset selloffs, investors can expect a much leaner and meaner Pengrowth in 2018.

For those investors who like to follow the smart money, billionaire investor Seymour Schulich bought millions of extra shares in Pengrowth in early October, boosting his position from 19 percent of the stock to 24 percent. He claims that he is confident that oil and gas is going up.

Pembina Pipeline: The North American pipeline industry has had a tough year, but the recent approval of the Keystone XL pipeline route and the growing need for transportation capacity should act as a boon for the sector.

Pembina Pipeline Corp. has ridden the oil price crash in an impressive manner, maintaining a good stock price and increasing its dividend. This is a stock that pays you to wait, and as the sector continues to improve it is likely investors will see good gains here.

TransCanada is a major oil and energy company based in Calgary, Canada. The company owns and operates energy infrastructure throughout North America. TransCanada is one of the continent’s largest providers of gas storage, and owns and has interests in approximately 11,800 megawatts of power generations.

With TransCanada’s massive influence throughout North America, it is no wonder that the company is among one of Canada’s highest valued energy companies. Investors can feel comfortable with the company due to its huge and diverse portfolio, and continuing eye for success.

This article was originally published on Oilprice.com