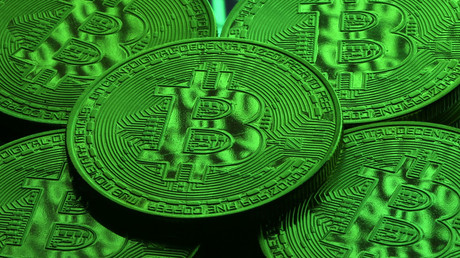 A day rarely goes by without Bitcoin in the news. The stories usually center around its fluctuating value but one artist has made headlines by turning the phenomenon into a literal work of art.

Andy Bauch created his ‘New Money’ series brick by brick, using some 100,000 LEGO pieces. Hidden within the collection of more than a dozen works is an estimated $10,000 worth of bitcoin and other cryptocurrencies – all you have to do is crack the code to get your hands on the virtual gold.

The colorful mosaics are visual representations of Bauch’s own cryptocurrency wallet codes. Those with a keen eye for enigma-solving could be in for a windfall. For Bauch the “central questions” behind the works are: “What is the value of art?” and “what is the value of money?”

“In ​New Money​, the Bitcoins embedded in each piece provide poignant commentary on the ethereal and fragile value of both, with their prices fluctuating in tandem with the constantly shifting cryptocurrency market,” Bauch said in a press release about his project.

Each title in the LEGO-rendered series relates to the value of the bitcoin when Bauch initially purchased it. For example, the above piece is called ‘$80’. Other works are called $20, $50, and $90. In a nod to the ever-changing value of cryptocurrency, the value of the coin represented in Bauch’s pieces is also constantly changing.

However, if a keen-eyed observer manages to solve the riddle, they can then drain the digital cash from the corresponding wallet.

For the artist, the exhibition is a way of helping people “without computer science backgrounds” to “visualize and understand the rather abstract concept of cryptocurrencies and simultaneous democratizing the potential and volatility that comes along with them.”