Bitcoin Just Puked Back Below $7,000 After Triggering ‘Death Cross’ 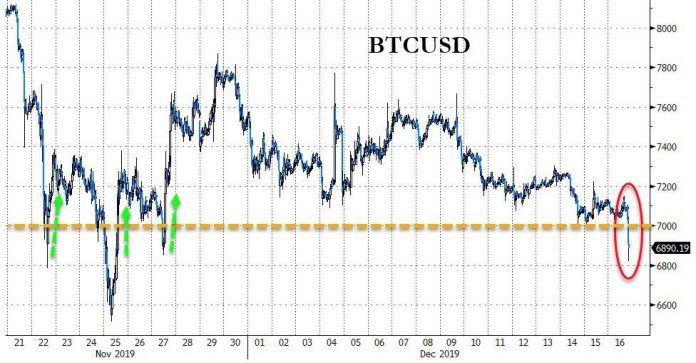 Crypto markets just plunged – on no obvious news-driven catalyst – with Bitcoin breaking back below the key $7,000 level for the first time since Thanksgiving.

But, Cryptos remain up dramatically over the past 12 months…

However, many remain positive on the longer-term outlook for the cryptocurrency as CoinTelegraph reports, the price of Bitcoin will skyrocket up to $100,000 in the coming year, according to the founder of infamous darknet marketplace Silk Road.

In a series of blog posts on Dec. 10, Ross Ulbricht — the founder of now-defunct anonymous marketplace Silk Road — predicted that BTC’s price will reach $100,000 in 2020. The blogs were published based on letters he wrote in prison, using a type of market analysis known as Elliott Wave Theory.

Ulbricht claimed the possibility to carry out such an analysis even without knowing Bitcoin day-to-day price movements and the general condition of the market. To forecast the highs and lows in financial market cycles, Ulbright identified extremes in investor psychology. In terms of Bitcoin, investors’ emotions purportedly play a more significant role as opposed to traditional markets.

As such, Bitcoin price could be artificially increased by investor expectations combined with mass psychology and through a positive feedback loop of buyer optimism.