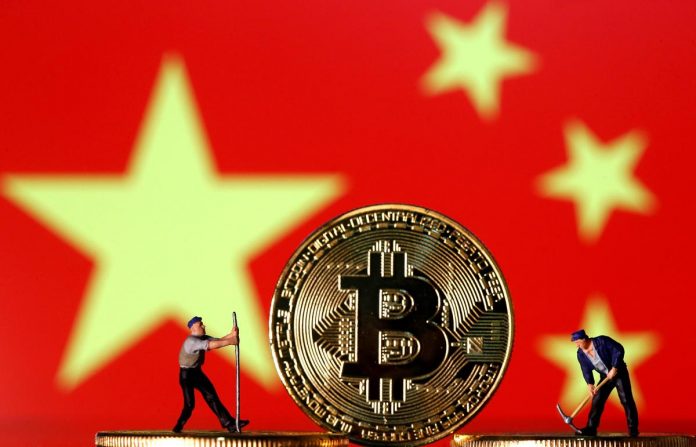 LONDON (Reuters) – Bitcoin held ground on Monday near a one-month high scaled over the weekend after China’s president Xi Jinping said the world’s second biggest economy should accelerate the development of blockchain technology.

Blockchain, a digital ledger that forms the backbone of many cryptocurrencies such as bitcoin, should be the core for innovation in China, Xi said on Thursday.

Bitcoin BTC=BTSP surged 24% between Friday and Saturday after Xi’s comments, touching $10,350 in its biggest two-day jump since the height of its retail-driven bubble in December 2017. Other major cryptocurrencies including ethereum ETH=BTSP and Ripple’s XRP XRP=BTSP also soared.

In early London trading, bitcoin – the largest cryptocurrency by market capitalization – was down 1.6% at $9,403.

Cryptocurrency exchanges are banned in China, though trading is popular on over-the-counter venues, and Chinese buyers account for major volumes on platforms elsewhere, market players say.

“The positive comments from the Chinese leader will continue to support the broader crypto prices to maintain at current levels, as China remains a major player when it comes to global crypto trading,” said Andy Cheung, head of operations of OKEx, a Malta-based exchange popular among Chinese, in an email.

China-based Google searches for bitcoin and blockchain also spiked after Xi’s comments, suggesting that the remarks had piqued intense interest in cryptocurrencies.

“There have definitely been more conversations since the weekend,” said Anthony Wong of Hong Kong-based crypto investment firm Orichal Partners.

Bitcoin has slumped in recent months as politicians and regulators across the world have criticized Facebook’s planned Libra cryptocurrency. It had lost a third since it touched its highest this year in June on hopes that Libra would hasten the mainstream acceptance of virtual coins.