Bitcoin Cash recently issued an upgrade to make the previously unspendable Segwit coins on BCH spendable and redeemable again, but when an unknown miner attempted to claim coins that two of the largest BCH mining pools disagreed with their ownership claims, they reorged the chain to reverse the claims.

1/ What I’ve gathered from loose details:
First, there was an unintentional split with the recent #BCH “upgrade.”

@TheCryptoconomy broke down the events leading up to the reason behind the upgrade, the “attack”, and the proceeding actions by BTC.top and BTC.com to reorg the chain and reverse this miner’s transactions that gained access to funds. @TheCryptoconomy also highlighted how some developers are concerned with the precedent that this action sets.

However, another user, u/m4ktub1st explained on reddit that the issue is being discussed a lot, contrary to the belief of others. u/m4ktub1st also asked some very relevant questions in terms of lessons that could be learned, such as “[i]f it was morally correct or not for a miner to take that action” and “[i]f enabling segwit recovery had been properly planned”.

-The May 15 BCH hard fork made unspendable coins spendable again, allowing miners to claim them.
-When an unknown miner claimed these coins, the https://t.co/2sGfitTsv8 & https://t.co/nNx0VzRrHA pools coordinated 51%-attack, to return coins to original owners.

Ultimately, many consider that BTC.com and BTC.top acted benevolently, but the issue brings attention to the fact that they had the majority hash power and begs the question of what if they had chose, or may choose in the future, to not act benevolently. This is a form of trust and not a trustless, decentralized system.

Another major concern this event raises is if mining power is too concentrated within the hands of a few mining pools. Cryptocurrency is meant to be decentralized by having numerous independent miners contributing to the overall processing power of the coins so no one person or group can have an overwhelming influence. However, these large miners mitigate that objective by concentrating the hashing power, and thus, the power to manipulate and influence the blockchain based on their wishes. 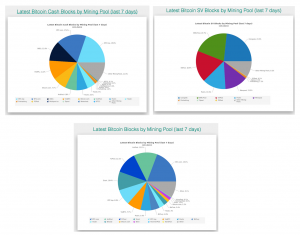 Looking at the past seven days worth of mined block data, over 50% of the Bitcoin Cash blocks were mined by 3-4 miners, BTC SV by 3-4 miners, and BTC by 4 miners. While exact hashrates and percent of mined blocks change daily, even a slight variation in miner uptime can place these blockchains into complete reliance on the good will actions of a few mining pools. This Bitcoin Cash “attack” and “solution” illustrated it is relatively easy for mining pools to collude/cooperate.

This also brings back thoughts of the not-to-distant Binance attack where CZ considered the option of reorging the chain to redistribute the stolen funds away from the hackers and back to the miners. In that case, CZ was openly discussing the option of working with the multiple miners necessary to carry out the reorganization. However, after significant backlash, CZ quickly backed down from the option.

Dash setting itself apart with innovation

Dash recently released version 0.14, which includes ChainLocks to further prevent against 51% attacks more than what other coins are capable of achieving. ChainLocks permanently locks in blocks according to a first-seen rule. Thus, even if one or a few miners controlled 51% of the Dash hashrate and attempted to reorganize the Dash blockchain, they would be unsuccessful. This is a first for proof-of-work coins and gives Dash a security advantage since other coins have been shown to be at risk of 51% attacks, especially if there are rentable hashrates and the exchange price is low.