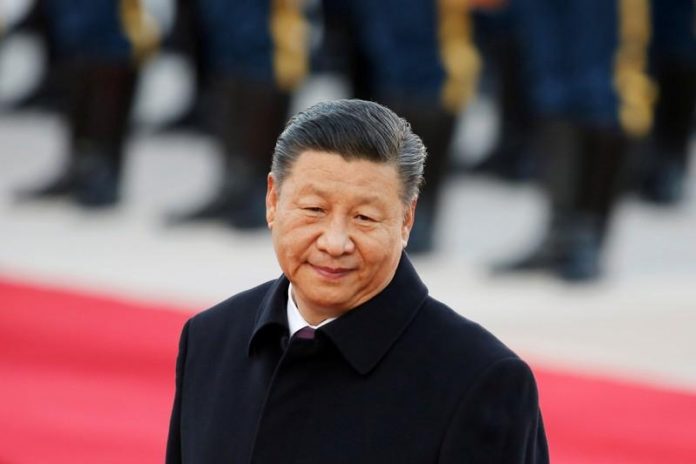 LONDON (Reuters) – Calls by China’s president to put blockchain at the heart of the country’s innovation could tip the scales toward Beijing in the global race to lead in the fledgling technology, analysts and investors said.

Xi Jinping said last week that China should accelerate the development of blockchain, in remarks that marked the first time Beijing has thrown its weight behind the widely hyped – but still unproven – technology.

Reinforcing the public embrace of blockchain, a Chinese central bank official said on Monday commercial banks should step up their application of the technology to embrace digital finance.

The backing came at a key moment in the evolution of the technology. Blockchain, originally conceived as the base for the cryptocurrency bitcoin, is a shared ledger that can be used to record and share information in real time.

No blockchain project has yet found widespread commercial usage. Any China-led system that gains traction could push the country to the forefront, leading figures in the technology said.

That would have profound implications for applications from finance and payments to commerce, they said.

“If China wins the race to have the world’s largest business blockchains actually transacting real-world financial activity, it will be the first-mover and thereby build in all the default features into the platform,” said Lex Sokolin, global financial-technology co-head at U.S. blockchain developer and investor ConsenSys.

In the West, banks, tech companies and retailers – attracted by promises of lower costs – have poured billions of dollars into testing blockchain. But few projects have proceeded or gained wide application, a Reuters analysis earlier this year found.

A number of competing protocols, from the original bitcoin blockchain to other open-source platforms, are jostling for adoption. None has gained predominance.

Many industry figures expect a blockchain project that’s widely used will become a standard for the field. Beijing’s support could see a Chinese blockchain project achieve that, said Garrick Hileman, head of research at crypto firm Blockchain and author of a University of Cambridge study on the tech.

“The significance of the Xi announcement should not be underestimated at all,” Hileman said. “You could see a Chinese-led, and more tightly controlled, platform emerge that’s certainly different to some of the open networks that have dominated the space, like bitcoin.”

Beijing’s support may also lead to greater investment in related companies, potentially hastening the mainstream application and use of the technology, industry figures said.

“I do expect to see multi-billion dollar support for core Chinese tech companies,” said ConsenSys’s Sokolin, adding that any forced implementation of the tech in finance and commerce sectors would be a key Chinese advantage.

Bets on blockchain and cryptocurrency-related companies in the West have far outpaced China this year after lagging in 2018, data from research firm PitchBook shows. U.S. investment alone reached $1.1 billion in 2019, compared with $47 million in China. In 2018, though, Chinese firms attracted bets worth $3 billion, compared with$2.6 billion in the United States.

While blockchain investment in the West has grown, a PricewaterhouseCoopers survey last year found that uncertainty over regulation has dampened the commercial adoption of blockchain.

Xi’s backing, a rare example of the leader of a major economy supporting blockchain, contrasts with the equivocal support from other countries, said Windsor Holden, an independent telecoms and payments consultant who tracks blockchain.

“Most governments in the West have been far more cautious,” he said. “The sheer fact that there is so much support for the project in China clearly puts any initiatives or standards that emerge on the front foot.”