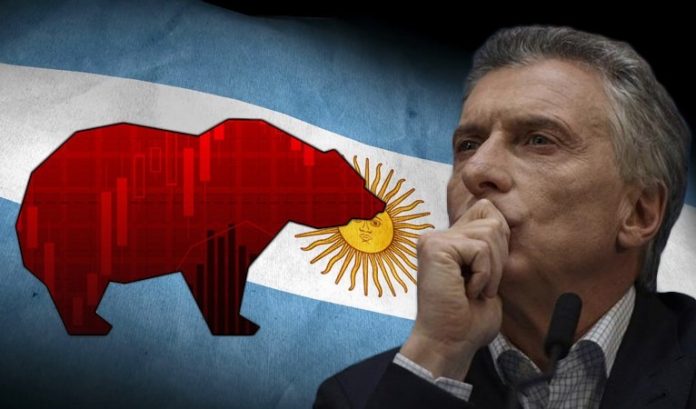 Argentina, which has already defaulted on its debt twice in the new millennia, in 2001 and 2014, is reinstituting capital controls as an attempt to minimize the effects of its currency rapidly approaching hyperinflation as the economy turns sour, setting up a potential cryptocurrency run in the country.

The Argentinian peso is down more than 35% against the US dollar in August alone and their central bank’s foreign exchange reserves are now only at $58 billion, 25%  below the April peak. Argentinian president Mauricio Macri is facing pressure from a worsening economy that has inflation at 54% and the IMF projecting a GDP shrinkage of 1.2% this year. The worsening economy is already being seen by investors since Moody’s, the ratings agency, says the country has “significant exposure” to dollar-denominated obligations and factored that into their downgrade of the country’s debt rating:

“The government’s recent decision to delay repayment on short-term debt and stated intention of restructuring a portion of medium- and long-term debt signals mounting pressure on government finances, rising policy uncertainty and a rising expectation of investor losses”.

President Macri has already taken a $57 billion dollar bailout from the IMF, but still faces increasing economic pressure as the next election approaches in October, of which he already lost a primary vote in August to the left-wing opposition candidate, Alberto Fernández. This worried investors that the left-wing candidate might win the next election and maintain capital controls, which the current President Macri eliminated in 2015 when he took office, and has since reinstituted.

Government attempts to use laws and fiat to steer the economy

Capital controls are nothing new to Argentinians as they have already experienced the government laws that attempt to retain wealth within the country recently, including requiring businesses to quickly repatriate dollars earned overseas. This hinders companies from serving their customers, stakeholders, employees to the fullest and instead help the national government shore up its national currency that is collapsing for the government’s own unwise investments and spending.

Other countries such as Venezuela, Greece, and China have also attempted capital controls in an attempt to prop up their economy and local currency against other global currencies. The evaluation of capital controls are mixed since they can have varying success, but that success is still limited and places burdens on local businesses and individuals along with making the investment community nervous. The increasing exploration of capital controls by countries strengthens the value proposition for cryptocurrency, which enables individuals to retain full control of their money with a much more limited threat of seizure or outside interference.

According to data from Coin.Dance, trading volume on LocalBitcoins has seen a steady and consistent rise in Argentina over the past year. Venezuela, however, shows a much more dramatic rise in trading volume, showcasing the potential for demand growth in an economy experiencing full hyperinflation.

While the issues caused by capital controls give a sharp competitive advantage to most cryptocurrencies, some, such as Dash, are more suited to complete economic freedom due to their usability for small payments as well as large transfers and storing value. A main reason that individuals and businesses want to avoid capital controls and are afraid of the policy is because they value the ability to move their money and use it wherever, however, and whenever they want. As such, not every cryptocurrency would meet these criteria equally, since a payments system needs to be as fast and as cheap as using cash or cash equivalents in order to compete on that level. Bitcoin, which can at times operate normally, can face periodic spikes in transaction times and costs that make some transaction uneconomical. However, Dash has consistently maintained lower transaction costs and fast transaction times even during the three million transaction stress test and can be used at thousands of stores as well as to purchase gift cards.

While Dash has a fledgling presence in Argentina, earlier this year local exchange SouthXchange integrated Dash, including InstantSend support. This not only enabled direct Dash buying in Argentina, but also added instant deposits and withdrawals, so that users can take advantage of cross-exchange arbitrage opportunities or simply move their funds with speed, security, and ease.